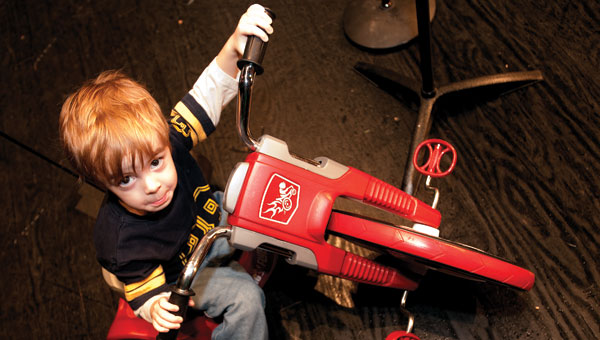 (ABOVE) Mason Daniels is the recipient of a brand new three-wheeled bike during the annual bike giveaway Saturday. The event hosted by Dickess Auto Repair and Advance Auto Parts helped to provide, with help from sponsors, more than 150 bikes this holiday season.

When Mary and Mark Bailey lost everything they owned to a house fire, they had no idea how they would get back on their feet again, let alone how to provide Christmas for their three children. It has been four months since the fire claimed the Bailey’s Fox Hollow home and the family is still struggling.

They were able to purchase a small trailer with insurance money, but utilities are still a hardship.

“We are just having a hard time getting stuff turned on,” Mary Bailey said.

Thanks to local churches and friends, Mary said monetary donations have helped the family through the difficult time.

“We are grateful,” she said. “We may all be cooped up in a tiny trailer, but we are together.”

Saturday evening, the Bailey family felt the support of the community once again as 10-year-old Colton and 15-year-old Jerry walked up on stage at Ironton High School to collect their brand new bicycles.

“They were not hardly going to get anything,” Mary said, saying the giveaway was a relief for the family.

Jerry and Colton were just two of nearly 160 children to receive bikes through a giveaway started by Dickess Auto Repair and Advance Auto Parts.

“It means everything to me,” Greene said. “It means a lot to them to. You wouldn’t believe how much it helped us out.”

This was the second year for the giveaway, an effort that was met by an overwhelming display of community support, organizers said.

“I am amazed,” said Don Schwartz, manager of Advance. “Absolutely amazed. This turned into something so fantastic.”

Last year, the two businesses collaborated to give away two bicycles, rather than have staff Christmas parties. Within a few short weeks, the community caught wind and donations started flooding in, enabling 32 needy children to receive a bicycle.

This fall, the community began donating before the businesses could even advertise for the giveaway. Parents flooded the raffle box at Advance with names for the drawing and local school provided the names of children who were in need.

The businesses’ initial goal of 100 bikes was surpassed more than a month ago, but people and business just kept donating. The giveaway had grown so much, Ironton High School agreed to let Dickess and Schwartz use the auditorium and cafeteria for the event.

Two of John Dickess’ nephews, both mechanics at his shop, had a hand in assembling each of the 158 bikes that were given out Saturday night.

“It is crazy this year,” said Brandon Dickess. “Donations went way beyond what I thought.”

“I think it is a wonderful feeling,” Derik Dickess said. “I never thought it would get this big.”

And the donations didn’t stop with just bicycles and cash.

Comic books, toys, even a Christmas tree from K. Dickess Christmas Tree Farm was raffled off.

And of course Santa and Batman where there, taking pictures with the children.

Siblings Franklin, Paula and Stella Petty sat squirming in their seats on Saturday, pumped up from all the excitement.

“It was supposed to have been a surprise, but I think they found out,” said Chester Petty, father of the 10-, 9-, and 7-year-olds, pointing at the stage full of bicycles. “I still had fun though.”

Petty, like many parents, wanted to provide the best Christmas possible for his children. Without the giveaway, he said he couldn’t have done it alone.

“It means a great deal,” Petty said “I’ll do anything in the world for my kids.”

One by one, the names of more than 150 children were called to receive their gift. For some children, it was their first bicycle.

“Every child should have a bike,” John Dickess said. “I asked, when I called parents, if their child had a bike. Most said no and some said they had never had a bike.”

To be able to organize the event, Dickess said, reminded him of giving his children their first bicycles.

“You can’t get any better feeling than that,” he said.