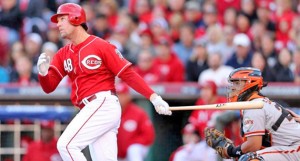 CINCINNATI (AP) — Ryan Ludwick left the Reds to see if there was a better deal available on the free agent market. He found at least one, but turned it down to stay with Cincinnati.

The left fielder signed a two-year, $15 million deal on Monday that includes a mutual option for the 2015 season. He agreed to the contract over the weekend and came for the formal announcement.

After first baseman Joey Votto got hurt at midseason, Ludwick emerged as one of the team’s most consistent run producers, helping the Reds win the NL Central for the second time in three years.

“I think ultimately I’ve always wanted to prove that one All-Star year wasn’t a fluke and I can be an All-Star again,” said Ludwick, an All-Star with St. Louis in 2008. “The ultimate goal would be to win a World Series. That’s one of the reasons I came back here. I think we have guys in place one through nine (in the batting order). We brought back pretty much the whole team.”

Ludwick hit three homers during the Reds’ first-round loss to the San Francisco Giants in the playoffs.

He came to Cincinnati on a one-year, $2 million deal for 2012 that included a mutual option for 2013 at $5 million. Instead, he took a $500,000 buyout, interested in seeing what other teams would offer. General manager Walt Jocketty made an offer, then waited to see what Ludwick decided.

“He had several clubs chasing after him, two or three in particular that would have been attractive places,” Jocketty said. “At least one had more money on the table. I think it’s a credit to Ryan that we tried to make a deal that was fair, that we felt comfortable with.”

Ludwick struggled in the first half of the season. When Votto needed knee surgery and missed 48 games, Ludwick became one of Cincinnati’s top hitters, batting .340 with 12 homers and 36 RBIs while the first baseman recovered. Jocketty made keeping him a priority.

“He was a very important part of our success last year as a middle-of-the-order bat,” Jocketty said. “It was a bat we had to replace somehow, and I wanted Luddy back for a lot of reasons. I think he’ll continue to do well in this ballpark and he’ll continue to provide leadership with this ballclub.”

It’s the Reds’ second major deal in the offseason to keep their roster intact.

Closer Ryan Madson also exercised his contract option after the season and signed with the Angels. The Reds gave Jonathan Broxton a three-year, $21 million deal, which allows them to use him as the closer and move Aroldis Chapman back into the rotation. The Reds got Broxton in a trade from Kansas City in July, and he became a free agent after the season.

South Point’s Brett Justice (20) drives toward the basket as Ironton’s Karlee McMackin defends. Justice had 18 points in a... read more