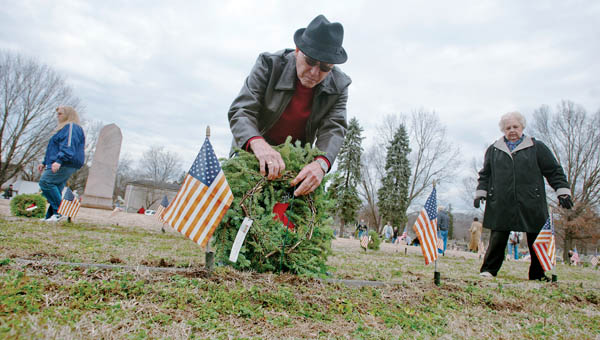 Bob Miller lays a wreath at the Soldiers Plot at Woodland Cemetery Saturday during the Wreaths Across America ceremony.

The small hands of Maddy Wiseman and Aubrey Allen couldn’t hold the fresh evergreen wreath with its soft red bow without joining forces.

So each young girl grasped one side of the greenery, then walk toward the grave of someone they never knew, delicately lowering it onto that final resting place.

Nearby their grandmother, Yvonne Riedel, watched with a slight smile of pride coming across her face. She had brought them to Woodland Cemetery on a cold winter Saturday to be part of the making of a new kind of history for Ironton.

“I want to make sure they know the sacrifice made for them and everyone,” Riedel said.

As a crowd of 50 placed the wreaths throughout the Soldiers Plot of the cemetery, they were part of a similar choreography that tens of thousands across the country were doing at that same moment. Saturday was the inaugural event for Ironton’s Wreaths Across America. But, for so many, the national event has become a December tradition as they show respect for the country’s fallen heroes.

Bringing the event to Woodland came from the efforts of two friends, Linda Dalton of Pedro and Juanita Southers of Ironton, who last year traveled to Arlington National Cemetery to join 80,000 to honor the military buried there.

Wreaths Across America was started in 1992 by Morrill Worcester of Harrington, Maine. Today more than 500 cemeteries participate in the one-day event, including many in Ohio.

The Woodland service began at the Cross of Honor with master of ceremonies Leon Dalton leading the audience standing in a semi circle in the middle of the plot in the Pledge of Allegiance.

Then the crowd, saluting or with hand over their heart, joined David Pemberton in singing the national anthem followed by a moment of silence.

“We are gathered here today on this memorial site to remember we are one nation with one flag,” Dalton said. “The freedom we enjoy today hasn’t come without a price. We can worship as we see fit. … We can travel from one end of the nation to the other without asking permission …We have the right to succeed and the right to fail in whatever endeavor we pursue. We thank those who are still fighting and dying. We still remember.

“We honor them and their families and the sacrifice they made. We owe them our way of life”

Then a representative from the Army, Navy, Marines, Coast Guard, Merchant Marines, Air Force and POW stepped forward to place a wreath in front of each branch’s flag before the audience placed more than 200 wreaths across the section where 950 service men and women are buried.

Soon the section was covered with the wreaths that will stay in place for the next month as a living tribute to the county’s men and women who served in the military.

“Next year we want to place a wreath on every grave here,” Dalton said. “That is our hope, our prayer.”

Just as a human being, and certainly as a parent of two young children, the breaking news alerts sent a... read more