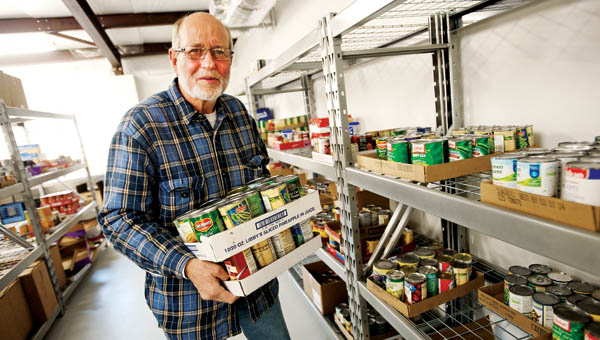 Last year, the food pantry at Church of Christ gave out more than 60,000 pounds of food to nearly 6,000 people in Lawrence County.

If the current economic climate is any indication of this year’s numbers, Bill Fearing said he expects those totals to be higher at the end of this year.

“For the month of November, I think we served 164 families and that added up to 554 people,” Fearing said. “And we had given out almost 5,000 pounds of food in November.”

Fearing coordinates the pantry at the church, located at Tenth and Vine streets in Ironton, and has for the past seven years. Since then, there has been a steady rise in the number of people who seek assistance for food.

“Since the economy has taken a nosedive like it has here in the past couple years, and then with all the things that have been going on here within the past year, our clients have picked up,” Fearing said.

The Church of Christ pantry hands out food from 9 to 11 a.m. each Tuesday and Thursday by referrals from organizations like the Ironton-Lawrence Community Action Organization, and the Department of Jobs and Family Services.

“Especially when we had the power outages and people lost a lot of their food in their freezers and refrigerators,” he said. “We got a lot of first time people at that time.”

And Fearing is not the only pantry coordinator seeing the hunger grow in Lawrence County.

Both Dave Frazer and the Rev. Jeff Cremeans both said their pantries are seeing an increase of those in need from month to month.

Frazer is the director of Harvest for the Hungry on Fifth and Railroad streets. The pantry, formerly housed in the basement of First United Methodist Church, opened at its new location in September, and since then, has provided food for more than 1,500 people.

With food stamp allowances expected to decrease next year, Frazer said the number of people using food pantries will continue to increase.

“People were not expecting them to cut food stamps $50 a month,” Frazer said. “Where do you think they are going to come?”

Department of Jobs and Family Services announced last month that the nearly 17,000 Lawrence Countians assisted by food stamps would see a monthly cut of $50 due to a reduction by the Food and Nutrition Service that overseas the food allotment program. However, the state was able to negotiate that down to about $23/month cut.

Harvest for the Hungry is open from 9 a.m. to noon Mondays, Wednesdays and Fridays, and is by referrals.

Cremeans is the director of the Ironton City Welfare Mission on North Fifth Street Having already broken mission records at Thanksgiving with meals served to 948 people, the Christmas season is heading in that direction as well.

Cremeans said 700 families were register edfor this year’s Christmas food basket giveaway, as well as 1,400 children for the toy giveaway, both numbers up from last year.

He also said most of the totals kept by the mission are higher in the first 11 months of this year than in all of last year.

The mission also provides food baskets throughout the year on an emergency basis, as well as serves hot meals five days a week and assists with utility bills. Last year the mission served more than 12,000 meals.

“For food orders and utilities, about 50 percent are first timers,” Cremeans said. “Some are embarrassed and nearly in tears.”

All three also said, in addition to the rising number of people using the facilities, donations are down and local suppliers are struggling as well. Sometimes, getting basic staple items is difficult.

“Peanut butter and jelly is the hardest thing,” Frazer said. “We give it to everybody and it’s hard to keep up with.”

Harvest for the Hungry and Church of Christ use the Second Harvest Food Bank in Logan more to stock a portion of their pantries.

Fearing said it’s not as easy as just ordering whatever you want.

“Within the past several months, they have been having a shortage of food too,” Fearing said. “Whenever I go online to see what they have in their warehouse, what I can order, normally I order 10 cases of each item, like green beans, corn, peanut butter, stuff like that. And if they don’t have it available, they will cut me from what I get and maybe only send me eight cases or five cases. So right now there is a shortage for them.”

Frazer said he sometimes travels to six or seven stores in one day to get the lowest price on food items.

In addition to buying food from local food banks and grocery stores, the pantries rely heavily on donations of food and money from the community.

“We couldn’t do it on our own,” Cremeans said. “No one church could do it all. It’s a community effort. We are just an extended arm of the community.”

“Rock Hill High School has been very good at putting on drives the past few years and whenever they do they donate to the food bank here,” Fearing said. “Not only that, people will donate money for the food pantry to buy what we need.”

There are many other food pantries across the county and local schools, churches and business have made a push during the holiday season to donate.

“I don’t think you really realize it until you are involved in it,” Fearing said. “The need is greater than what people realize at times. Especially with our elderly people, people that are on fixed incomes. They only have so much money. A lot of people have medical bills, medicine to buy. And they have to decide do I use it for medication or do I use it for food. Although we can’t give them enough food to last the whole month, but we can give them enough until their checks come or something like that.”

SOUTH POINT — A $10,000 grant from AEP Ohio is bringing The Point industrial park closer to positioning itself for... read more