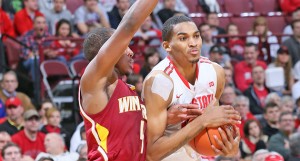 COLUMBUS (AP) — Whether it was looking ahead to the rematch with No. 9 Kansas or Winthrop playing well, seventh-ranked Ohio State was in trouble until Deshaun Thomas started making shots.

Thomas scored 21 points — missing nine straight shots at one point and making five in a row at another — to lead No. 7 Ohio State past Winthrop 65-55 on Tuesday night.

“It was just being ready. I knew they weren’t falling,” Thomas said. “That’s what players do. You’ve just got to be ready when the moment comes. I got hot there for a second. It started on our defensive end — we got 10 straight stops. Everything was going on from there.”

It was the last tuneup for the Buckeyes (9-1) before Saturday’s matchup with Kansas, which beat them twice last year, once at Allen Fieldhouse and then in the Final Four.

Thomas conceded that perhaps Ohio State was looking past Winthrop.

If that was indeed the case, coach Thad Matta said his players must learn they can’t afford to take anyone lightly.

“(That’s) unfortunate if that was the case, because the one thing you try to get kids to understand, you only get 30 or 32 guaranteed games a college season,” Matta said. “We’ve got to get better. I don’t think this team is as good as it’s going to be. By the same token, you’ve got to have that mindset of coming to work every single day. If they looked ahead, they learned a valuable lesson.”

Lenzelle Smith Jr. added 14 points for the Buckeyes, who have won four in a row, all at home, since a 73-68 defeat at No. 2 Duke on Nov. 28 in the ACC/Big Ten Challenge — a game the Buckeyes led most of the way.

There was no question that he was the key figure on offense.

“Good lord, Deshaun Thomas started being Deshaun Thomas and he did what All-Americans do,” Winthrop coach Pat Kelsey said. “He put the game on his shoulders and grabbed it by the neck and it was never the same after that.”

Derrick Henry had 12 points to lead Winthrop (4-5), which was coming off a 50-49 upset of Ohio University, which has its top nine players back from an NCAA tournament team a year ago. Ohio came in averaging 74.2 points a game, but was shut down by the Eagles.

Ohio State didn’t have a clear upper hand through the first 36 minutes.

Thomas hit his first two shots of the night for a quick 5-0 lead, then missed the next nine.

But the Eagles would not go away.

Henry made a 3 from the left wing to cut the gap to three. Thomas passed up a perimeter jumper with a nifty pass to Amir Williams for a three-point play only to have Gideon Gamble add a 3 at the other end to cut the lead to 52-47.

Aaron Craft’s steal led to him hitting two free throws. Shannon Scott then tipped away a ball and then broke quickly to the basket, taking a long pass from Craft for an easy breakaway layup and a 56-47 lead.

“You definitely sensed that we were kind of going back and forth and something needed to happen,” said Craft, who had three steals and five assists to go with eight points.

“Our team has to live on the defensive end of the floor. We can’t expect to try to outscore teams, we’ve got to get stops and try to get easy layups in transition. That’s one way that can help us get back into rhythm, back in the flow.”

Williams then scored inside off a pass from Smith and the lead was 58-47. Williams swatted a shot away and then received a pass from Thomas for an easy dunk to push the lead to 60-47 with 5:36 left.

“Watching him on tape is phenomenal,” he said. “He is a tiger on the ball. I’ve never seen as relentless as an on-ball defender as Aaron Craft. He sets the tone for their defense. I showed our guys clips of him guarding the ball and he’s like a piranha smelling blood. It’s unbelievable. When he does that, it just gives them courage defensively.”

Winthrop got as close as seven points in the final minute.

Matta was asked why his team didn’t seem to be in tune for all of the first half and much of the second.

“I don’t know. That’s kind of the million-dollar question,” he said. “You’re still trying to learn your team a little bit and have an understanding of what do you need to say, what do you need to do collectively to get the guys as one unit out there. When things weren’t going as well as we wanted them to go, I didn’t think we came together the way we needed to.”

Thomas said there was still time for the Buckeyes to come up with some answers.

“We can’t have the start that we did for this game,” he said. “All that we can do is prepare. We’ve got three days to get ready for Kansas.”

The Ironton Middle School girls’ basketball teams have been added to The Ironton Classic on Thursday. The girls will play... read more