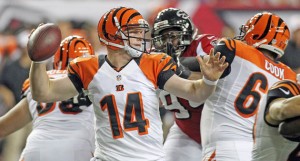 CINCINNATI (AP) — Andy Dalton needs to play much better than he has in the past few weeks if the Bengals are going to pull off a franchise rarity.

Dalton was indecisive and repeatedly missed throws during a 34-13 win in Philadelphia that was set up by the Eagles’ fumbling. Despite their struggles on offense, the Bengals (8-6) moved into playoff position with the victory last Thursday.

They can clinch a spot on Sunday by beating the Steelers (7-7) in Pittsburgh, something that’s been very tough for them to do. A lot of it will come down to whether Dalton pulls out of his recent slump.

“I’ve had chances and I haven’t hit them,” Dalton said on Wednesday. “I expect to play better myself, and I’m going to play better.”

The second-year quarterback is 0-6 against Pittsburgh and Baltimore. During the three losses to Pittsburgh, he has completed only 40 of 82 passes and never thrown for more than 170 yards in a game. The Bengals have only 38 first downs in the three games.

Dalton has been on a downturn in the last three games — wins at San Diego and Philadelphia, as well as a home loss to Dallas.

His passer ratings of 65.2, 76.1 and 74.2 are his lowest for a three-game stretch this season. He has thrown for three touchdowns, been intercepted three times and gotten sacked 12 times.

Offensive coordinator Jay Gruden said some of the sacks have been the result of Dalton holding onto the ball too long. He was 13 of 27 for 127 yards with six sacks in the loss at Philadelphia, one of the worst showings of his career.

“We expect to see progress and not regression, and he kind of took a step back,” Gruden said. “That’s disappointing. But in fairness to him, it’s a road game, a Thursday night game against a pretty good defensive front and they have two good cornerbacks and they did a good job. They played hard and spirited and took it to us.

“But we had some plays that should have been made that weren’t.”

Dalton’s passer rating has been lower only one other time this season. He was 14 of 28 for 105 yards with a game-turning interception and a 56.4 passer rating during a 24-17 loss to Pittsburgh at Paul Brown Stadium on Oct. 21. Dalton managed only one completion to A.J. Green as the Steelers took away quick throws to the Pro Bowl receiver.

Dalton and Green never got comfortable against Pittsburgh’s defense.

“There were a couple of opportunities,” Green said on Wednesday. “But their scheme is so good it’s hard to guess what they’re doing.”

The rematch is a decisive game for both teams.

A loss would eliminate the Steelers. The Bengals would clinch at least a wild card berth with a victory and make a little franchise history. Only once during their 44 previous seasons have they gone to the playoffs in back-to-back years. They were a wild card last season as well, losing to Houston in the opening round.

Only twice in franchise history have the Bengals followed a playoff appearance with a winning record the next season. A victory in Pittsburgh would mark the third time it’s happened.

Cincinnati finishes the season at home against Baltimore (9-5), which leads the AFC North and has already clinched a playoff spot.

“There’s really not much else to say except we’ve got to come play our best,” Dalton said. “And we’ve got to do whatever it takes to win the game.”

NOTES: Some players wore hats with Chris Henry’s No. 15 and had photos of the former Bengals receiver in their lockers on Wednesday. Henry died in December 2009 after falling out of a pickup truck driven by his fiancie. His former teammates do something every December in his memory. … Josh Brown will likely do the kicking for the third straight game. K Mike Nugent said Wednesday he’s still bothered by a strained right calf that has prevented him from kicking a ball hard. “You don’t want to have something react and kind of go through the whole process for another however many days,” Nugent said. “One of those things — just being very patient with it.” Brown has made all of his six field goal attempts, including a 52-yarder.

The Classic has three days of games, talent

Jim Walker jim.walker@irontontribune.com   It’s that time of the year. Christmas? Well, yeah, but even more so this weekend is... read more