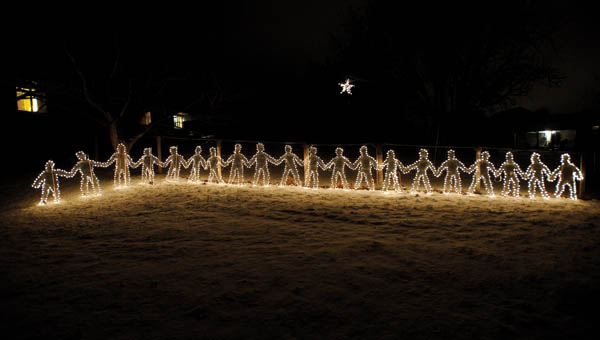 Lights outlined in the forms of 20 small figures holding hands composed of mesh wiring with a single star up high shines bright in tribute to the 20 children of Sand Hook Elementary School that lost their lives. The display is created by Ironton resident Daniel Hartwig. The tribute can be seen best along Batham Lane in North Ironton in a field on the right side.

A week ago Friday Daniel Hartwig was like a lot of people this time of year, just thinking about the Christmas holiday.

Then Hartwig, a retired art professor as well as practicing sculptor, turned on his television and watched with shock the unfolding tragedy at the Sandy Hook Elementary School where 20 children and six adults were gunned down at the school in Newtown, Conn.

“I was watching the news as it came across,” he said. “Maybe somebody got hurt. Two hours later it was all these dead children. It is still horrible. It will change things in our nation.”

Stricken with a sense of pain and outrage the artist felt he had to make tangible what he was feeling in his heart.

So he took to his basement studio for the next six days to create a tribute to the slain — a lighted life-sized outline of 20 children standing, reaching their hands out to each other.

“It was something that had to be done,” Hartwig said. “I don’t know how else to say it. It made sense. If you think about Christmas, it all comes back to the child. This was to try to honor those innocent kids.”

Hartwig, with help from his wife Peggy, put in 70 hours of work on the sculpture.

The sculpture stands on a lot off Batham Lane that Hartwig owns, behind his house at 1554 Florence Ave. Positioned at a distance above the sculpture is a Christmas star.

“The star behind the children is in our backyard,” he said. “You think of the birth of Christ. You come back to children. It is a reflection of hope.”

Hartwig plans to keep the sculpture up until the New Year.

“I am hoping people will look at it and reflect, maybe say a prayer for the children,” he said. “I want people to see it and maybe feel what it would be like to see 20 children together. Those 20 lives just taken for no reason.”

ROCKWELL, N.C. (AP) — Al Gentry is running out of time to find his brother’s killer. After years of chasing... read more