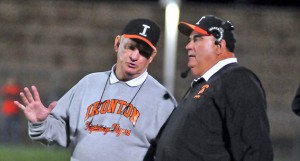 The 2012 sports year began with an ending.

Lutz posted a 381-91-5 record in 42 seasons, 39 at Ironton where he was 361-83-4 with two state championships, six runners-up, two state coach of the year awards, 28 playoff appearances, and his election to the Ohio High School Football Coaches Association and National Football Coaches Hall of Fames.

He began his career at St. Joseph where he was 20-8-1 with two Ohio Valley Conference titles and a runner-up.

Here’s look at some of the local sports highlights from the past year.

Long-time Ironton booster and Tiger Clan member John Wolfe was honored for more than 40 years of service. It was also announced that a scholarship in his honor would be awarded to a student/athlete beginning in 2012.

The Fairland Lady Dragons won the district title only to lose 50-33 to Oak Hill in the regional semifinals.

The Lady Dragons’ Terra Stapleton was the Div. III district Player of the Year and Jon Buchanan the top coach for their 20-0 regular season.

A 73-57 win by Chesapeake over Peebles in the district finals gave Ryan Davis his 100th career coaching win.

Chesapeake lost in the regional semifinals and Ironton fell to Portsmouth in the championship game.

Rick McKnight — who has announced Ironton Fighting Tigers’ football and basketball games on the public address system for 25 years — was honored for his service by the Southeast Ohio District Athletic Board.

Ironton High School powerlifters Tommy Saul and Austin Rowe were state champions in their divisions and Drew Wells was third.

Fairland dedicated its softball field to former coach Jim Bailey who is the school’s all-time win leader in the sport.

Former Ironton distance runner Gary Monroe set the Morehead State University 1,500 meters record. He was sixth in the conference meet and was named the school’s Freshman of the Year.

The Dragons 4×400 relay team of Raine Wireman, Ryan Stewart, Jalen Brooks and Logan Rowe qualified for the state meet along with Tanner Mattie in the 3200 and Amber Pappas in the 300-meter hurdles. Wireman also advanced in the 800 meters.

Kerns, 21, didn’t stop with the MOGA title. He climbed to even greater heights by winning the prestigious Ohio Amateur by two shots over former Ohio State player Alex Redfield.

St. Joseph graduate Mike Sharp wrote a baseball song “Touch ‘Em All” that was made into a video and released.

Fairland boys and girls won the OVC cross country championships as well as district titles. The girls won the regional meet and the boys were second as both teams qualified for the state meet.

Morehead State honored Ironton’s Ernie DeCourley as they inducted the late defensive lineman into the school’s athletic Hall of Fame.

Texas A&M upset No. 1-ranked Alabama thanks to an outstanding defensive performance led by defensive coordinator Mark Snyder, the former Ironton All-Ohio and Marshall defensive back and ex-Marshall head coach.

The Associated Press Southeast District honored Ironton’s Aaron Stephens as the top defensive player, running back Patrick Lewis as the co-Offensive Player and Mark Vass as the co-Coach of the Year.

Stephens was also invited to play in the Blue/Grey National All-Star Game.

COLUMBUS (AP) — Jack Mewhort loves college football. Yet he likely won’t go out of his way to watch a... read more