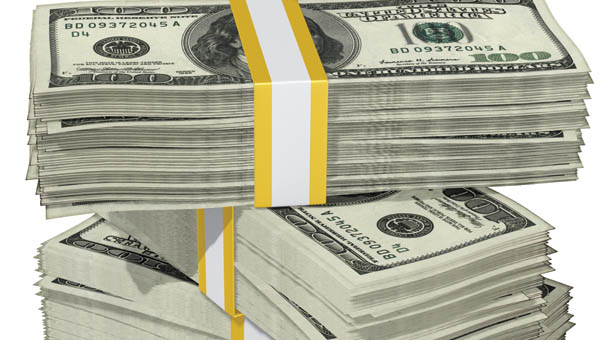 Big bucks were spent to become president of the United States in 2008.

Big bucks were spent to become president of the United States in 2008. The winning candidate put out more than $760 million to get almost 70 million votes. That equates to President Barack Obama spending more than $10 a vote.

But that pales to what the experts predict will be the final tally to win that job again — $2.5 billion is expected to be the cost the two candidates combined spent on the 2012 presidential election, when all the numbers are in.

Those figures reinforce the old adage that only the rich can win political office.

The question now is does that filter down to the grassroots level? A look at some recent local races shows the big spenders sometimes win and sometimes lose. But veterans of the game agree running for office isn’t cheap.

“It is not any cheaper,” said County Auditor Jason Stephens, who, before taking over the auditor’s office, spent 10 years as a Lawrence County Commissioner. “Is it more expensive? It is hard to say. After you have been in it for awhile, your name is more recognizable. Overall, it has evolved into trying to be more efficient with your message. It still requires a significant amount of funds to run for even local office. Even running for school board can cost a lot.”

The last campaign Stephens was in was when he ran for auditor in November 2010 beating County Treasurer Stephen Burcham 9,764 to 7,906 or winning 55.26 percent of the vote.

For that campaign, from spring primary to fall general election, Stephens spent $28,178 compared with the $8,467 spent by Burcham, according to the county board of elections.

A lot of the higher costs for the auditor’s race came from simple inflation whether it was buying signs for yards or sending out mailers.

“Postage has gone up over the years,” Stephens said. “That costs more.”

In the auditor’s race Stephens spent more than $8,000 on postage followed by almost $5,000 for signs. The next biggest expense was one relatively new to Lawrence County campaigns — approximately $3,000 to political strategy consultants.

Running for a county office isn’t done in a vacuum. What’s going on in the nation’s capital can determine the level of difficulty for a local race.

“The challenge is to get the voters’ attention, especially in a presidential year when there are so many people getting focused on the top of the ticket,” Stephens said. “A lot of times a local race can get lost in the shuffle. You are not competing with the presidential race, but in a way you are. There is only so much politics voters can take. Negative ads can shut them down and they don’t pay any attention to any of it.”

But still, for Stephens, the most effective campaign weapon requires time and energy rather than cold hard cash.

“The way you campaign it is still pretty straightforward,” he said. “You have to talk with more people. You have to connect with people and convince them you can do the job. There is nothing better than face to face shaking hands. That doesn’t cost any money but time.”

Another veteran of the campaign trail is Terry Null who first went into politics running for Ironton City Council in 1976 and ended his public servant career when he ran for the last time as Lawrence County Commission in 1996.

“I don’t think this past cycle locally they spent as much on campaigns as in the past,” Null said. “When I first started out for council, it was a small amount. You would have to have posters. The last campaign was so expensive. I can’t remember how much I spent but it was in the thousands.”

The way the money was spent then mirrors in large part the way it is spent nowadays: ads in high school football programs, newspapers and, the big cash cow, the Lawrence County Junior Fair each July when politicians outbid each other over steers, goats, pigs, ducks and chicks at the livestock sale.

“The fair was expensive,” Null said. “Every summer it was expected. As a local politician, you were easy to get ahold of.”

Like Stephens, Null said campaigning to win means getting out from Oak Hill to Crown City, meeting as many voters in-between as a candidate’s energy level allows.

“If you get into a local race, you can anticipate getting your name out,” he said. “Each campaign there was an increase on what you spent locally. And it is pretty much out of your own pocket. You don’t have an IBM or the NRA contributing locally to you.”

Ella Lawless has never run for office, but for 17 years she was a paid observer as the deputy director of the Lawrence County Board of Elections. In that not quite two-decade period, she watched campaign costs triple.

“It started at $10,000 to $12,000 and went up to $30,000 for some of them, when you combine pre-primary, post primary, pre and post general” she said. “When they had primary competition, it could be $8,000 to $10,000 then. They spent a lot of money on football programs and things like sponsoring school programs and the different organizations in the schools. And the fair. They spent a lot of money at the fair.”

The higher the spot on the ticket the more rules there are restricting how much an individual can give. In federal and Ohio elections the rules are tight. The limit an individual can give to a single candidate or the campaign committee is $2,500 per election. Primaries, runoffs and general elections are viewed separately, meaning the candidate could potentially get up to $7,500 if his name were on three separate ballots.

A political action committee backing federal candidates can get $5,000 per year from an individual and to a state or local party committee an individual can give $10,000 per calendar year.

And children can get into the act as long as they are 7 or older. Then they can contribute the same amount of money as their parents.

But for county and city races there are no rules unless a municipality states so in its charter.

When financial adviser Ryan Smith decided to go for the state representative seat John Carey had held, he understood money would be factor in his campaign, just not how big a factor. Especially since his first campaign for the House seat meant beating two other opponents — Dr. Bill Dingus, Lawrence Economic Development Corp., director and Jackson County Commissioner Jim Riepenhoff — and running campaigns in the four counties that district seat represents.

“Anybody running for offices it comes into mind to raise funds,” Smith said. “We tried to lay out a marketing plan and had multiple fundraisers. That created some excitement for the campaign in addition to the funds.”

He chose the Aerial Theater in his hometown of Gallipolis, a 117-year-old opera house turned performing arts center, as the venue for his fundraisers. Next came coming up the guest list, better known as potential donors.

“I likened it to my wedding,” Smith said. “You can’t think of everybody at once. It is kind of a work in progress. You could also lean on former political donor lists.”

As the money started coming in, it went to pay for a multi-pronged approach to getting the votes.

“We focused on some direct mail, ran some TV ads that were really effective and had the signs as well,” he said. “It was multi-faceted and we had some newspaper ads.”

The result was a primary so close it forced a recount as Smith beat Dingus by four-tenths of a percent, or roughly 60 votes. A loss that cost Dingus $92,227 or 2.3 times what Smith spent on the primary.

“We knocked on a lot of doors and tried to meet people personally and attend functions,” Smith said. “They want that personal touch. But when you are covering four counties that makes it challenging. A lot of money was spent and you wonder if you could have spent that money on other projects.”

Layoffs reduced but still looming   Potentially devastating layoffs to the county’s 911 dispatching center were averted Thursday as the... read more