Buckeyes hold on to beat Michigan 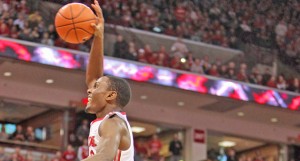 COLUMBUS (AP) — After an up-and-down season of disappointments in big games, the Ohio State Buckeyes badly needed to put things together.

And that’s exactly what they did.

Deshaun Thomas had 20 points including the first and last baskets in a 16-0 run, and the 15th-ranked Buckeyes survived a late rally by No. 2 Michigan to hang on for a 56-53 victory on Sunday.

The Buckeyes (13-3, 3-1) could not afford another loss in the Big Ten if they hoped to remain in the hunt for at least a piece of their fourth straight title.

On top of that, they finally bagged a top opponent. They came in 12-0 against unranked teams and a dismal 0-3 against teams in the Associated Press Top 25.

After a momentous, if nerve-racking victory, they are suddenly back in the thick of things again.

“I’m sure that’s always in the back of your mind,” said point guard Aaron Craft. “Having played the better teams that we’ve played, we kind of took a step back and tried to find a way to get a big win. Anytime you can do it against a team like Michigan, in this league, (that’s something). And you can’t lose at home. That’s something you really harp on if you want to be there at the end of the season to try to win a Big Ten championship.”

The win kept Ohio State within range of the leaders in the brutally difficult conference. A loss and they might have already been playing for an NCAA seed two months before March Madness.

Each time the Buckeyes had truly been tested this season, they had come up short.

They led at No. 1 Duke most of the way but wilted down the stretch to lose 73-68. When they hosted No. 6 Kansas, they couldn’t come up with a big basket in the second half and fell 74-66. Then they were thrashed in a horrible effort in their first conference road game, getting pounded 74-55 by No. 11 Illinois.

“We’re going to have a lot of opportunities in the Big Ten to play huge games,” coach Thad Matta said. “From the perspective of Duke and Kansas, both were winnable games. Today, fortunately for us, we were able to come out and start the game the way we did and finish it the way we did.

“That in between, though, was a little scary,” Matta said.

After Michigan’s Trey Burke, a Columbus native who led the Wolverines with 15 points, hit a 3 the first trip down court, the Buckeyes reeled off 16 unanswered points. They led by as many as 21 points in the opening half.

Slowly but surely, however, Michigan clawed its way back.

Eventually, Glenn Robinson III flipped in a 3 from the right wing to tie it at 46 with just under 6 minutes left.

The Buckeyes regained some momentum when Shannon Scott fed post player Evan Ravenel for a dunk to regain the lead. On the next possession, Ohio State went inside again and Ravenel, averaging 6.3 points a game, bulled his way for another bucket.

After another Michigan missed shot, Thomas took a pass on the left baseline and made a quick spin to the end line before banking in a shot for a 52-46 lead.

Craft — who Michigan coach John Beilein said was as good as any defender he had ever seen — prevented Burke from driving. His path blocked, Burke jumped back and then launched the shot with 17 seconds left.

It rattled around the rim.

“Some go in and some don’t,” said Burke, a sophomore who just happens to be from Columbus and friends with several of the Buckeyes. “I thought it was going in. It looked good. I think it went in and then came out.”

Instead, it kicked out to Ohio State guard Lenzelle Smith Jr. who grabbed it for his 10th rebound. Moments later he was fouled and hit two free throws for breathing room. Craft, who had struggled on offense most of the season, then nailed two more foul shots to more than offset Burke’s circus 3-pointer with a second left.

“We showed toughness. We showed composure,” said Thomas, the Big Ten’s leading scorer. “They hit some big shots and had a couple of steals, but we showed our composure and we stayed together as a team.”

The loss likely prevented Michigan from climbing to No. 1 in the AP poll for the first time in more than 20 years, since November 1992. It also kept the Wolverines for setting a school record for the best record starting a season.

The Buckeyes, meanwhile, were feeling a lot better about themselves.

Matta, however, had a different perspective.

“We beat a great basketball team,” he said. “You look at it and you say, great win, but I think this game signifies we’re halfway through our season. This is 16 games now and we’re guaranteed 32. We’ve still got a long way to go.”

Jim Walker jim.walker@irontontribune.com   PEDRO — This time when the Rock Hill Redmen ran into a roadblock, they went through... read more