Sheriff back to running 911 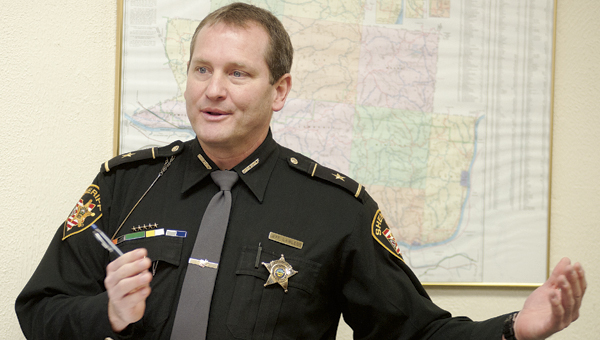 Sheriff Jeff Lawless addresses the county commissioners as well as members of his staff concerning layoffs Thursday during the weekly commissioners’ meeting.

In front of a chamber filled with sheriff’s office employees, the Lawrence County Commission pumped up Sheriff Jeff Lawless’ budget by $340,000 and put him back in charge of a consolidated 911 dispatching center, reversing last week’s commission actions.

Now the question remains, will that additional funding enable the sheriff to stop all of the threatened layoffs scheduled to go into effect in five weeks?

The sheriff said he wants to sit down with the county auditor and review the figures before determining if Thursday’s decisions will enable him to rescind the layoffs.

“It sounds promising to support the road deputies and dispatchers without layoffs,” Lawless said after the meeting. “Will we need all 14 part-time dispatchers? Possibly we will not.”

Last week, Lawless sent out layoff notices to five road deputies, 14 part-time 911 dispatchers, one part-time sheriff’s dispatcher, a part-time corrections officer and the director of 911 after his budget was funded $400,000 less than it was in 2012. That was part of the 2013 budget mandate that cut salaries of all offices by 23.5 percent.

As far as calling back 911 director Lonnie Best, Lawless said, “We will have to see if the funds are there to support his position.”

At last Thursday’s meeting Lawless agreed to a proposal by Commissioner Les Boggs to pull 911 from the sheriff’s jurisdiction to save the jobs of the 14 part-time 911 dispatchers that were to be laid off. Boggs then proposed taking $75,000 from the 911 dispatching budget and transferring it to the sheriff’s dispatchers, plus $150,000 from unappropriated money in the half-percent sales tax account.

However, at this Thursday’s meeting, Pratt and Commissioner Freddie Hayes reversed course and overturned last week’s actions to make more funding available to the sheriff. Boggs did not attend the meeting as he was in court for an arraignment on a domestic abuse charge.

“We were not satisfied with what happened (at last week’s meeting),” Commission President Bill Pratt said. “That will fix part of the problem.”

Before presenting his alternate motion Pratt cautioned the audience.

“There is not enough money for the county to fund everything,” he said. “Once this is done, appropriations will be done for the year.”

Then Pratt proposed transferring $120,000 from the wireless 911 fund for operating the dispatching service and $220,000 from the unappropriated money in the half percent sales tax to the road deputy budget, bringing that fund up to $1,001,250. That is approximately $3,900 more than was spent for deputies’ salaries and retirement in 2012.

The wireless 911 account is funded from a charge on every cell phone in the county. That money goes to the state that transfers back a portion of it. Last year there was $168,000 in that fund from a 28-cent per phone charge. But the legislature was considering eliminating the charge and only adopted a reduced fee of 25-cents per phone on Dec. 20, the day the commission approved their budget.

“We were in limbo,” Pratt said. “We passed our budget not knowing if (the money) was there.”

The reason the commission did not appropriate all of the half percent sales tax was to have a carryover for 2014.

“We are confident sales tax will be enough and that will be held back for carryover for 2014,” the commissioner said.

With the consolidation of 911, Pratt said there will have to be efficiencies at the center and the number of dispatchers may need to be adjusted.

“I think that this will fix the problem,” Pratt said. “It is an appropriate and realistic plan.”

However Lawless cautioned that he would review the figures to confirm of the new transfers will cover all employee costs.

“Emotions have been running high,” the sheriff told the commission. “What we need to do is sit down with the auditor and get a look at the numbers and what we need to be able to provide for the safety of the county.”

Utility tax could be possible option   An ad hoc committee to review instituting a utility tax and other options... read more