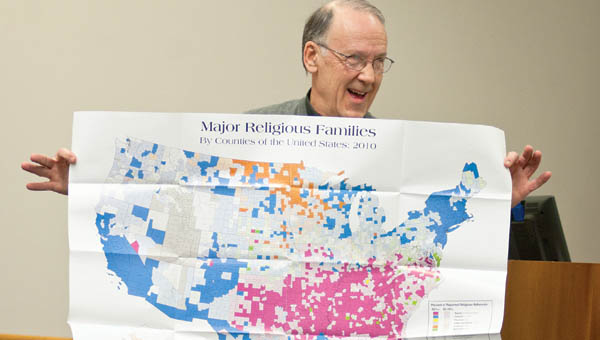 As the world views itself as a more closely tied global community, showing how to reach out to diverse cultural and religious groups by finding common ground was the focus of an interfaith panel discussion as part of this week’s Dr. Martin Luther King Jr. community celebration.

“It is very important to understand how we can communicate and create a sense of community,” Dr. Purbas Dias, Ohio University Southern assistant professor in communication studies, told the audience at the event Tuesday on campus. “There is a huge gap between reality and whose reality and how that reality is portrayed.”

Despite the differences between Jew, Catholic, Protestant and Muslim, the panelists in explaining their religion centered their comments as much as on the similarities, especially that all the religions are monotheistic with a wide range of beliefs within each one.

“Judaism, like other religions, has quite a spectrum of beliefs and observances,” Eglinton said. “There is the ultra Orthodox, the Reform Jews who are very modern in their view of the world and just as observant and the humanist secular. And it is culturally based. You don’t have to believe in God to be a Jew.”

An essence of Judaism is what Eglinton called the duty to question saying Abraham was more righteous than Noah because he dared to argue with God.

“Jews are so into arguing,” she said. “We don’t have many answers. God is One. Then you can argue what that means. It is more how you act than what you believe.”

However, both the rabbi and the three Christian clergymen agreed that one of the major differences was how the word Messiah is defined. In Judaism Messiah means the political redeemer of Israel while in Christianity the Messiah or Christ is the way to salvation.

“It is the same word with different understandings,” the rabbi said.

In Christianity the follower views Jesus and God as one.

“Salvation is the sacrificial love of Christ,” Dotts said. “Christianity is very concerned with eternal life.”

With the current political upheavals in the Middle East many principles of Islam are often misrepresented in the media causing a misunderstanding of the religion, Khader said.

One is the idea that Osama Bin Laden was a religious authority, when in fact he was a businessman, the Marshall professor said.

And the concept of jihad often viewed in a negative manner in the media describes the struggle to be a good person.

“If you harm a single person, you will not see Heaven,” Khader said. “All people are equal in the sight of God.”

OUS’ Martin Luther King celebration continues today with the Brown Bag Concert Series featuring Michelle Dotts and Rick Payne at noon today at the OUS Rotunda; the film, “Freedom Riders,” will be from 2:30 to 4:30 p.m. Thursday at Bowman Auditorium; and a brunch Friday at Ohio University Southern-Proctorville with Pastor Samuel R. Moore from the Full Gospel Assembly of Huntington, as guest speaker.

SOUTH POINT — A short police chase through South Point resulted in a man being ejected from his car after... read more