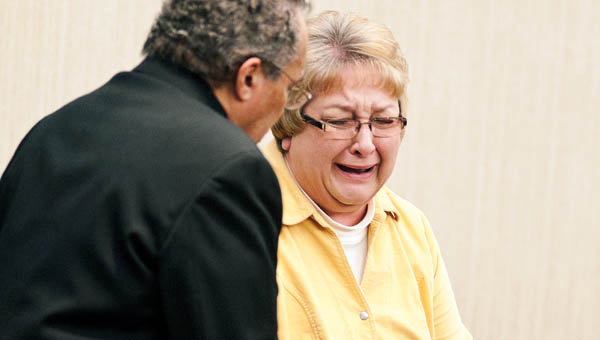 Beverly Copley, seen with attorney Sterling Gill, breaks down after being given a three-year prison sentence.

It was a decision that sent shockwaves through the courtroom.

A Proctorville woman who expected to be sentenced to probation for her crimes instead received a much harsher punishment, one that a victim in the case pleaded for just moments before.

Now a grown woman, that victim addressed the Lawrence County Common Pleas Court Wednesday and asked Judge Charles Cooper to make an example out of her aunt, Beverly Copley, and send her to prison for allowing the sexual abuse the victim and her sisters suffered as small children to continue.

“She failed miserably in protecting any of us,” the victim said, referring to Beverly Copley’s husband, Don Copley.

Don Copley, 69, previously pleaded guilty to 15 of 51 counts of first-degree rape of the three girls in late November and received a 60-year sentence in prison.

Beverly Copley, 57, of 1518 County Road 70, had previously pleaded guilty to two third-degree counts of child endangerment on Jan 9. Those charges had been amended from an indictment of 41 counts of first-degree complicity to rape.

The victim asked that, if Beverly wanted to continue to stand by her husband’s side, then she should be sent to prison as well.

According to Prosecuting Attorney Brigham Anderson, Don Copley agreed to plead guilty in exchange for his wife not being sent to prison.

He also said the three victims in the case had agreed to the plea bargain at that time.

The woman’s attorney, Sterling Gill of Columbus, agreed with the recommendation, saying Copley had already received a punishment “far more than incarceration could ever inflict on her.”

Gill also said his client suffered from an “emotional blackout” during the times of the rapes of her nieces and “was unable to see and respond in a matter that the law would require.”

Cooper disagreed, saying after reviewing Copley’s pre-sentence investigation, he felt the woman was still in denial of the charges against her and that she showed a “complete lack of remorse,” which was “deeply concerning to the court.”

Cooper sentenced the woman to three years in prison for each count, to be served concurrently.

After Copley heard her sentence, she cried out in tears to her attorney, “That’s not what you told me was going to happen. Why did you all do this?”

“I saw no remorse whatsoever,” Cooper said after the precedings. “At least Mr. Copley took responsibility. It bothers me when we are to that point and there is no acceptance to what they pled to.”

Copley said she plans to appeal the court’s decision.

The Copleys were indicted by a Lawrence County Grand Jury in February 2012 after their three nieces, now adults, came forward to report the abuse.

At the time the abuse began, the three sisters, ages 13, 7 and 6, had just been placed in the Copley home by the Department of Job and Family Services.

The eldest had also been raped by her father, Kenneth Copley, Don Copley’s brother, who was sentenced to prison for the crime in 1992.

In 1985, the first building for the Ohio University Southern campus in Ironton was constructed; 28 years later the university... read more