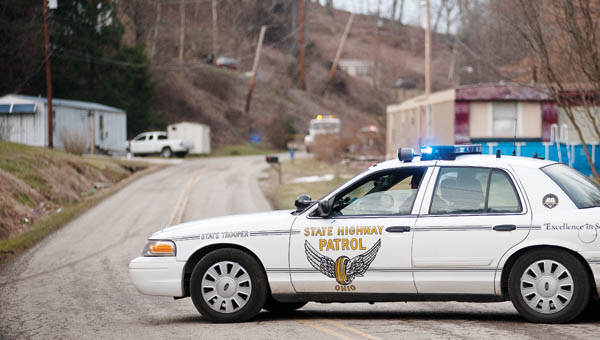 An Ohio State Highway Patrol cruiser blocks traffic on Hog Run Road Sunday afternoon following a standoff between a white male whose name has not been released and authorities. The man shot at officers before shooting himself.

A 911 call of shots fired on a rural road outside of Ironton Sunday afternoon turned into a standoff with police that ended when the suspect turned the gun on himself.

According to a release from the Lawrence County Sheriff’s Office, law enforcement received a domestic dispute call at about 3 p.m. The 911 caller stated that an individual driving a champagne-colored Ford Ranger pickup was driving by and shooting at a home located at 2718 County Road 181 (Hog Run Road).

Roger Crisp, 43, of 44 Campground Road, Waterloo, allegedly refused to comply when Coal Grove police officers attempted to get him to stop his vehicle, finally parking in the driveway of the home he had allegedly been shooting at, according to the report.

Crisp exited his vehicle and fired two shots at the home with a handgun. The man then took out a high-powered rifle and shot three rounds at the Coal Grove police officers, hitting one vehicle in the hood while the officer was still inside, according to the report.

Crisp then got back inside his vehicle and officers heard two more shots as they began to surround the vehicle. Using binoculars, the law enforcement officers saw the man was slumped in his vehicle. Upon approaching, the suspect was found holding a handgun and unresponsive.

Summer event to run for nine days this year

Workers are seen on site of the new fair barn back in June. This year the Lawrence County Fair will... read more