Summer event to run for nine days this year 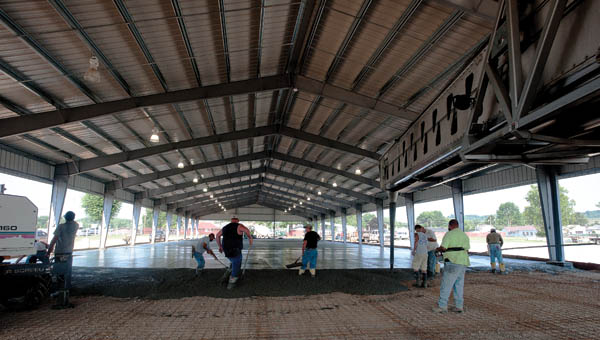 Workers are seen on site of the new fair barn back in June. This year the Lawrence County Fair will open gates on July 5 with all the day’s proceeds to go toward the fair barn fund.

ROME TOWNSHIP — This year’s Lawrence County Fair will be a nine-day affair as the fair board has decided to start the festivities earlier on Friday, July 5.

“We will start on Friday at 4 p.m., but opening ceremonies will still be Monday night,” Jim Thompson, newly elected fair board president, said. “We would like to keep that.”

Also new will be an increased gate price of $10 a day, with the goal of helping pay off the barn that was first used at last year’s fair.

“We were wanting to take the first day and donate that money to the barn fund,” Thompson said. “Whatever we take in that day will go toward the barn.”

A year ago the fair board authorized a Canton contractor to erect a $400,000 livestock barn to be ready for the 2012 fair. However the fair board contends the contractor was paid approximately $200,000 for work it says was not completed and that there were delays in the construction. The board then cancelled that construction contract, which started a series of lawsuits between the two parties that have yet to be resolved.

The fair board also had to put out additional money to hire another contractor to finish the work. That put the final price tag for the barn at close to $700,000, of which Thompson says only a small percentage has been paid for.

Also to help pay for the barn fair officials plan to make direct solicitations to area businesses asking them to make tax-deductible contributions to the fair barn fund. Advertising for the summertime event will also be ramped up as eight billboards throughout the Tri-State will promote the fair.

“That is something we have never done before,” Thompson said. “And we are going to start a woman’s auxiliary group and let them help out through the fair, get them involved.”

The board is still in the process of firming up nightly entertainment and Thompson could only confirm the Phil Fox Band for Monday night.

However Thompson could confirm that Michael’s from Columbus will again provide amusement park rides.

“He is bringing in some new rides,” Thompson said. “He has about $5 million worth of rides. He is going to bring in one ride that parents can ride with small kids.”

The fair board is still considering what individual or group in the county it wishes to dedicate this year’s fair to and may made that decision at its upcoming meetings.