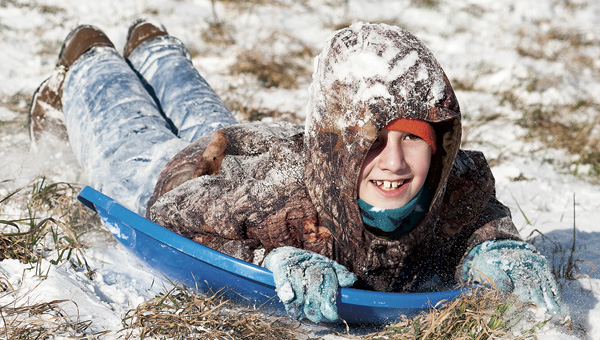 Renowned weather expert Punxsutawney Phil emerged from his dwelling in Pennsylvania Saturday to predict an early spring this year. But by the looks of the Tri-State that day, one may question the accuracy of the famous Groundhog Day conjecture.

Snow began falling late Saturday morning, quickly covering the ground and roadways with a fresh blanket of powder, in addition to Friday’s accumulation. All county schools were closed on Friday due to overnight snowfall.

The late morning snowfall continued through the afternoon, prompting a Level 1 Snow Emergency from the Lawrence County Sheriff’s Office. A level 1 means that the roadways are hazardous with blowing and drifting snow. Roads may also be icy and motorists are advised to drive with care.

The advisory came at about 11:40 a.m. At that time, dispatchers said it had been relatively quiet, with no calls of snow-related accidents.

Ohio State Highway Patrol dispatchers also said the early afternoon hours had been quiet, with only a few fender-benders reported.

A short time later, the Coal Grove Volunteer Fire Department responded to an accident on U.S. 52. A semi traveling westbound slid on the slick roadway, spinning 180 degrees and hitting the guard rail.

That was also about the same time the Lawrence County Engineer’s fleet of 12 trucks began clearing and salting roadways.

County Engineer Doug Cade said his crews would be out for about eight hours.

“Then we shut down for the night and come out early the next morning,” Cade said.

Typically, road crews return at about 5 or 6 a.m., Cade said.

The Ohio Department of Transportation District 9, which serves Lawrence County, also had crews working to combat snow and ice on the state highways.

At noon Saturday, the temperature was around 24 degrees with about an inch of fresh snowfall. By 5 p.m., there was about 3 inches in the City of Ironton.

A winter weather advisory issued by the National Weather Service in Charleston, W.Va., remains in effect until 10 a.m. today, with flurries throughout the day and possible snow accumulations from 3 to 5 inches across the Tri-State.

A Coal Grove man accused of shooting and killing his brother-in-law made his initial appearance in Lawrence County Municipal Court... read more