FedEx gets closer to opening 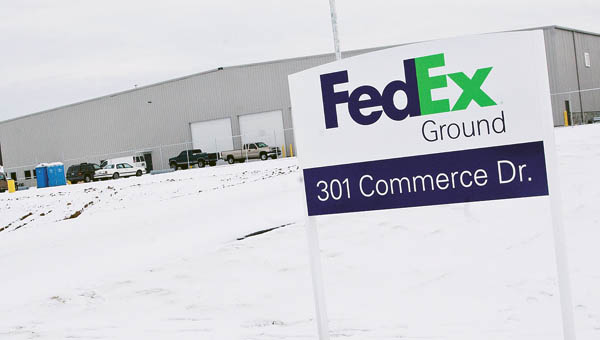 FedEx expects to open a ground operation at The Point.

SOUTH POINT — The signs went up this week, signifying that the latest building under construction at The Point industrial park will be the site of a new FedEx distribution center.

However, the company has yet to confirm that officially, release an opening date or announce the number of jobs the center will create.

“We cannot state that number with authenticity,” Dr. Bill Dingus, executive director of the Lawrence Economic Development Corp., said. “They have not officially told us yet. The building is not finished and is still under construction. Upon completion of the building it will be quite a few weeks installing the sorting equipment.”

Also this week, crews are installing equipment in the building to house the latest site for Intermountain Electronics, a Utah-based firm.

“They are recruiting 35 and anticipate it will grow up to 65,” Dingus said.

“They are going to hard rock mines and South Africa and internationally,” Dingus said. “They started out in Utah with largely western mines. As coal slowed down, they shifted to international and any kind of minerals other than coal.”

In December Chatham Steel, a company that had expanded operations to The Point in 2011, pulled out, citing the downturn in the coal industry. The Savannah, Ga.-based metal distribution company had opened in July 2011 in a 56,000-square-foot spec building at the park. It had employed 25 people.

Now that adds another building for the LEDC to market. However Chatham still has more than a year on its lease with the park. Dingus declined to give the amount the LEDC receives.

“It has hurt a lot of employees, but for the interest of the industrial park, it gives us a wonderful building to offer to other clients,” Dingus said. “We do feel for the employees. For us it is a tremendous building with cranes. It can support so many kinds of manufacturing.”

Two more spec building at the industrial park may soon have tenants. Both structures are designed for manufacturing. One is a 68,000-square-foot structure and the other is 30,000-square-foot that is crane ready.

“We made an offer to a company (for one building),” Dingus said. “It has been extended. We expect an answer within a few days.”

There has also been an offer extended to another firm for the second building.

“These kind of things, there is a great deal of work that goes on before they sign on the dotted line,” Dingus said. “These are major business decisions. If these two go through, all of a sudden we may be out of buildings.”

ASHLAND, Ky. — Tickets are on sale now for an amazing and unique show that features both the finest male... read more