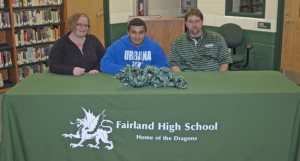 PROCTORVILLE — All Tyree Ceasar was asking for was an opportunity.
The Urbana Blue Knights made that wish come true.
Ceasar realized his dream to play college football after signing a letter-of-intent to play for Urbana University on Wednesday.
“They’re going to give me a chance. Most kids don’t get a chance,” said Ceasar.
“I really like the people on the football team and they’ve got pretty good coaches. I liked the atmosphere. Everybody was good to me and they’re real excited about the program.”
The 5-foot-8, 205-pound Ceasar was a fullback and defensive end for the Fairland Dragons. Urbana plans to use Ceasar at running back.
Ceasar got the chance thanks to a connection with a former Fairland player. Assistant coach Paul Smith — who is the defensive coordinator — played for the Dragons.
“Coach Smith asked (Fairland coach Dave Carroll) if we had anyone who could play and coach told them about me,” said Ceasar.
The Fairland connection wasn’t the only reason Urbana pursued Ceasar. After watching film and checking his resume, Urbana liked what they saw.
Ceasar was a first team selection to the Associated Press Division IV Southeast All-District team and was special mention All-Ohio.
Ceasar led the Dragons with 827 yards rushing on 141 carries for a 5.9 yards per carry average and scored five touchdowns. He also caught seven passes for 47 yards.
Urbana went 7-4 last year and posted its second straight season of seven or more wins. The Blue Knights finished third in the nine-team Great Lakes Valley Conference.
Urbana will switch to the 11-team Mountain East Conference this fall.
Ceasar is hoping for some playing time but he knows it won’t be easy.
“They said I have to work my way up. They gave me a list of positions I could play like running back, middle linebacker, slot receiver and special teams,” said Ceasar. “It’s going to take a lot of hard work and dedication.”
Fairland head coach Dave Carroll said Ceasar was the key to the Dragons’ offense. He added that if hard work and dedication are the keys to Ceasar playing at Urbana, then he believes his senior running back will get an opportunity.
“He’s one of the biggest hearted kids I’ve ever coached,” said Carroll. “He’s very dedicated.
“When he came here as a sophomore, he said he wanted to play college football. I told him with hard work and dedication he’d get that opportunity. Well, he’s done that and now he’s getting that opportunity.”
Ceasar was selected to play in the Gridiron Spellman Classic and plans to major in physical therapy.