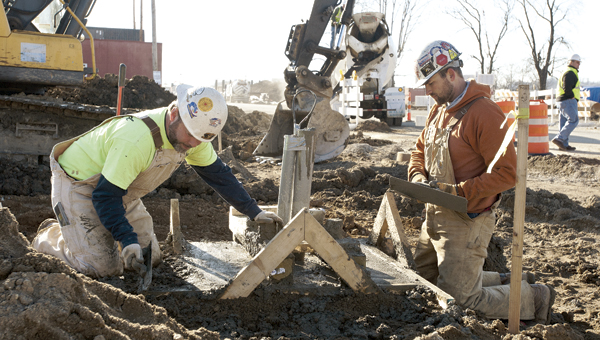 Westend Electric employees Kenny Stewart, left, and Dwane Johnson, right, work on a base for a traffic light at the site of the new Ironton-Russell Bridge along South Second Street.

Crews continue to carve out new intersections and entrances for the new Ironton-Russell Bridge being built near Second and Jefferson streets and connecting across the Ohio River at the viaduct on U.S. 23 on the Kentucky side.

“We are doing work that right now is preparing for the widening to the approach,” said Kathleen Fuller, spokesperson for the Ohio Department of Transportation District 9.

Work is also being done on signals and street lighting.

“All of this is a part of the larger project to widen that intersection and create a better turning movement for truck traffic,” Fuller said. “We have the subgrade ready for the pavement. That is where people are seeing things torn up. They should be ready to see the concrete down in the next couple of weeks, weather depending. It will start to take shape in the next couple of weeks.”

All approach piers on either side of the river have been completed. The interchange reconfiguration tying into the viadect on the U.S. 23 on the Kentucky side is 50 percent completed and the Kentucky abutment is almost 95 percent finished.

The bridge is projected to cost $81.2 million and should be completed by the fall of 2015. By the time the structure is complete, it will be constructed of more than 8.2 million pounds of steel and nearly 24,395 cubic yards of concrete.