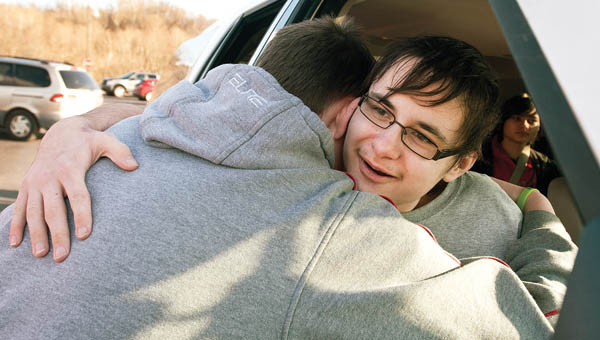 SOUTH POINT — It was a welcome home to remember for Daniel Hughes as he and his parents drove up to South Point High School where dozens of friends, family, students and teachers screamed loudly in celebration of his homecoming.

He returned Thursday for the first time since a dump truck hit him while biking to class at Ohio State University in September. His right leg had to be amputated and he has been undergoing rehabilitation in Columbus since the accident.

The crowd surged over to hug Daniel after the van stopped in the parking lot. They took turns telling him they have missed him and are proud of him for being strong.

Hughes never stopped smiling as he thanked them and said it is good to be back in Lawrence County.

“It feels wonderful to be home,” Hughes said. “Seeing all those people there was incredible. I’m looking forward to resting a bit, seeing my friends and family that I haven’t seen and eating Giovanni’s. That’s the big one. No pizza in Columbus compares.”

Family, friends and Hughes’ former teachers all said it is amazing he survived the accident, and even more so he has recovered so quickly while maintaining such a positive attitude.

Hughes said he attributes his surviving to his Eagle Scout training.

“I remember in an emergency preparedness class one of the best things you can do in an accident is not get all hyped up, scared or let any type of adrenaline kick in because that’ll get the blood flowing,” Hughes said. “The best thing you can do is to stay calm and collected, and I kept that thought in my mind the entire time and I managed to stay calm throughout the entire incident. They actually had to put me out at the hospital because I was awake and talking to them the entire time.”

And it is that personality, the smart, collected young man that makes him the person who inspired so many people to come out to wish him well, said Misty Wood, Hughes’ aunt and a math teacher at South Point.

“They said it was his mentality, his ability to stay calm that kept him alive,” Wood said. “He fought the whole time. He’s an amazing kid, he really is. He’s so sweet. Throughout this whole thing, he keeps apologizing. He got to come out on like a day pass from the rehab facility for Thanksgiving and we were all crowded in this small apartment in Columbus. He was asleep most of the time and he would wake up and just apologize. He really is something else.”

Eric Banks, Hughes’ friend who graduated with him, said he was texting Hughes before he came home and said he was just happy to have him back, even if only for a short visit. Like everyone else, he commented on Hughes’ personality and said he remembered him always being upbeat when they were in high school.

Hughes said he hopes to be able to start online classes soon to keep moving forward with his educational goals.

His mother and father said it felt wonderful to bring him home. Hughes is home for the weekend and will go back to Columbus on Monday to continue his rehabilitation.