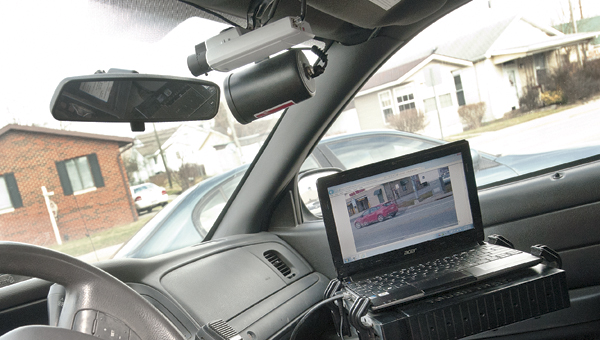 PROCTORVILLE — New cameras funded by a Homeland Security grant are enabling Proctorville officials to keep better surveillance on the village and its Ohio River boundary and speed up conducting information checks from traffic stops.

The $24,900 grant from the federal government and the W.Va., Port Authority has paid for four surveillance cameras. Two are located at the top of the village’s water tank and the others are installed in each of the two police cruisers.

“We can survey the whole village,” Proctorville Mayor Rick Dunfee said. “And they can use it for anything that is happening on the river.”

The cameras are linked to the computer at the village police department on State Street.

“We can also take the camera surveillance on our river park,” Dunfee said. “It all goes into a recorder and we can backup and see what was happening.”

The cameras in the cruisers can now facilitate license plate checks during traffic stops.

“The computer is hooked up with the Internet and we can do anything we want on police business, instead of going through the sheriff’s department,” Dunfee said. “(The officers) use it regularly.”

The village is also applying for an EPA grant to replace aging water lines installed in the 1930s.

“We will try to do it in two phases,” the mayor said. “We will be replacing all the old lines, the two-inch iron in the ground, with six inch plastic.”

The project would expect to start on the west end of the village by the riverside and cost $1.2 million.

Three Lawrence County members of the South Hills Chapter of the National Wild Turkey Federation were honored at the Ohio... read more