Drug abuse cited as reason for murder of Jenkins 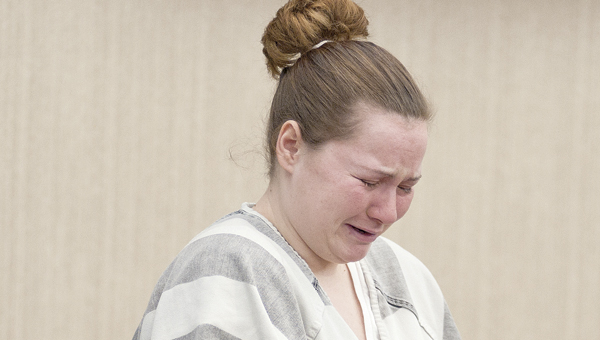 Ashley Seagraves cries during her sentencing Tuesday in Lawrence County Common Pleas Court. Seagraves was sentenced to life in prison for the murder of Delmar Jenkins. She will not be eligible for parole until she has served at least 23 years in prison.

The courtroom was quiet except for the sounds of stifled sobbing as Joyce McClellan read aloud a poem her brother, Delmar “Buddy” Jenkins, shared with her when he was alive.

“I destroy homes, tear families apart, take your children, and that’s just the start,” McClellan read. “I’m more costly than diamonds, more costly than gold. The sorrow I bring is a sight to behold.”

The poem, simply called “Pills,” brought McClellan to tears Tuesday as she read, reminding her that it was because of someone else’s addiction to prescription medication that her brother died.

On the night of June 10, 2012, Ashley Seagraves, 24, shot Jenkins in his home in Elizabeth Township while he slept, for no other reason than to steal his oxycodone, said Prosecuting Attorney Brigham Anderson.

“This incident occurred because of an addiction to prescription drugs,” Anderson said. “Delmar Jenkins was shot in his sleep so that Ashley Seagraves could take his pills. She was addicted to the drugs and she has admitted her guilt in shooting him because of the drugs.”

After Seagraves shot the man, she stole a safe belonging to Jenkins, which was later found abandoned in a wooded area by the Lawrence County Sheriff’s Office.

Seagraves pleaded guilty Monday — just one day before a jury trial was to begin — to the shooting death of 53-year-old Jenkins, as well as aggravated robbery, tampering with evidence and felonious assault on a Lawrence County Jail matron. She was sentenced to life in prison Tuesday in Lawrence County Common Pleas Court, but not before McClellan and her sister Margie Cooper pleaded for justice for their brother.

“I just wanted to remind Ashley what she has taken from this family,” Cooper said. “My brother was a very good man and he was very good to her. How she could do this to him, we’ll never understand. She took him away from his family. His grandkids. His sons. She is going to have the opportunity to watch her kids grow. It might be from a waiting room in prison, but still, she is going to have that opportunity. That is more than what she left my brother with.”

Cooper later said her brother brought Seagraves into his home whenever she needed a place to take a shower or a meal to eat.

Warren Morford, Seagraves’ attorney, said the incident was “the latest in a string of tragedies here and nationwide involving illicit drug use.”

“What led Mrs. Seagraves to use drugs was abuse that happened in her early years,” Morford told the court. “She was trying to self-medicate and get rid of those memories. True, that’s not what she should have done, but that’s what she did and that’s what many other people do. On the night of June 10 last year, her drug use led her to pull the trigger and kill a person. She has expressed remorse to me for that.”

Morford and Anderson negotiated a plea agreement that Seagraves would be sentenced to life in prison without the possibility of parole until she had served at least 23 years.

The sentence for murder is life in prison with the possibility of parole after 15 years. Since Seagraves shot Jenkins, that adds a gun specification to the charge and with it an additional mandatory consecutive three years to the sentence, making her parole eligibility only after 18 years.

Judge Charles Cooper also sentenced the woman to five years in prison for the robbery charge, to be served consecutively, making her eligible for parole after 23 years.

Had Seagraves gone to trial and gotten the maximum sentence, she would have received life in prison with the possibility of parole after 40 years.

“We believe this plea agreement is in the best interest of everybody,” Morford said. “It’s not just Mr. Jenkins that is the victim here. It’s every member of Jenkins’ family, every member of Mrs. Seagraves’ family. She has two young children that she is not going to get to hold except in a prison setting until they are in their early 20s.”

Seagraves is the mother of a 2-year-old and a 6-month-old son. Seagraves was pregnant at the time she murdered Jenkins and had the baby while in custody, costing the sheriff’s department approximately $26,000 in hospital expenses.

“Those children are going to be without a mother all because of drug use,” Morford said. “For those looking for an explanation, I would submit there is no explanation when drugs are involved.”

Though the case is now over, members of Jenkins’ family said closure will still take time and they hope Seagraves never gets approved for parole, echoing what Margie Cooper told the court.

“I just want her to know that in 23 years when she comes up for parole, it may not be me … but somebody will be there at her parole hearing to see that she stays just as long as we can possibly keep her in there.”