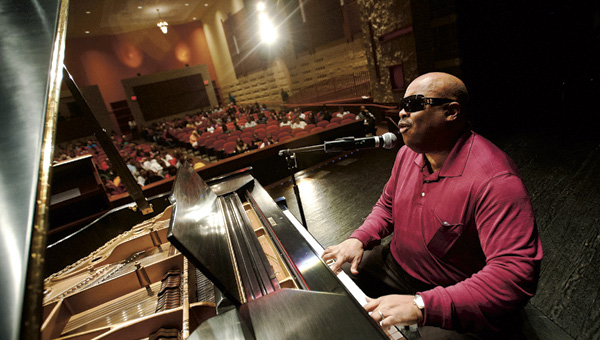 Dr. J.W. Smith, professor at Ohio University, performs the song “America the Beautiful” as part of a performance that was designed to communicate a message of life and love through music to students at Ironton High School.

Ohio University professor J.W. Smith sat down at the piano under the lights of the Ironton High School auditorium, played and sang his rendition of “I Have Arrived” and jumped up to go over to the lectern, grab the mic and start talking to the kids in the seats in front of him.

He did it with such ease a viewer may not have realized the man entertaining them was blind.

The students he was speaking to Thursday morning did know that fact, but there were still surprised looks on their faces as he played and sang without missing a note. After he finished his song he began speaking on the importance of not judging others based on their appearance or disability, because, as he had just proven, the cover of a book oftentimes does not give an accurate representation of what lies within.

“I think sometimes people forget about disability when they talk about diversity,” Smith said. “It is easy to talk about race or ethnicity, and they are very important, but I think it is very important for those of us with disabilities to be included in the conversation. I want to highlight the differences of people and how we should appreciate that about each other. I want to talk about my own blindness and share personal narratives to help others understand.”

The energy Smith poured into the piano and his song as he performed continued flowing as he spoke to the students in the seats below. He shared the story of a road trip his family went on when he was a boy, and how the lessons learned from that trip can apply to all life lessons.

“On a road trip you cannot anticipate everything you are going to encounter, but that shouldn’t keep you from going on,” Smith said. “You never know who you are going to encounter on your journey, or how they will affect it. We need to help each other, be there for each other. The troubles of man can bring together people who may not have otherwise met or socialized together.”

Smith’s lesson of diversity, acceptance and helping your fellow man was one that stuck with Kylie Thomas, senior at Ironton High. Thomas said she thought the message was perfect, and one people in Ironton really needed to hear.

“I liked it a lot because I think the same way he does,” Barnett said. “You can’t just be mean to everyone. I also believe in karma and if you are mean to someone it will come back to you one way or another.”

And the way karma can come back comes in many forms, Smith said. He warned students to avoid gangs and clicks because a person never knows what tomorrow holds. The kid you pick on today, could be your boss one day, he said.

While he shared many universal life lessons, Smith said, for obvious reasons, he always comes back to diversity and disability. Smith said he feels it is important for people to feel more comfortable around people with disabilities, to look past the visual and just see people.

“People are the same on the inside,” Smith said. “You may not look the part, but you can have the heart.”

When he was done speaking, Smith ended the way he started, with a song. After the last note of “America the Beautiful” faded from the auditorium, some of the students regained their look of awe for the man before them on the stage.