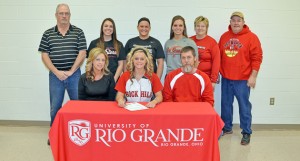 PEDRO — Sami Nixon is only a junior, but she got an early start on her college career.

The Rock Hill Redwomen softball pitcher took care of her college future early by signing a letter-of-intent Friday with the University of Rio Grande.

Nixon said she realized that she didn’t need any more time to look around for a college program once she visited Rio Grande.

“When I went up to Rio it felt like home. Everyone took me in. I knew that’s the one place I wanted to go,” said Nixon. “I’m excited. I feel relieved. A lot of pressure is off.”

While it didn’t take Nixon long to decide on her future school, second-year Rio Grande head coach Kristen Bradshaw also made up her mind quickly.

Bradshaw saw Nixon and some of her teammates during a game in the Rio Grande winter softball program.

“When I first saw her I liked how she carried herself. Her teammates looked up to her,” said Bradshaw.

Rio Grande had five pitchers and three are freshmen. Since Nixon won’t be on the campus for two more years, Bradshaw said there should be a spot in the rotation when she arrives.

“When she comes in the three freshmen will be juniors. I learned the hard way you need four or five pitchers,” said Bradshaw.

“It’s so much different coming into college. We might play 13 games in six or seven days. Our pitchers can throw back-to-back games and it’s great (Nixon) can throw every game. But the other teams get to see a pitcher a lot so it’s good if you can switch it up.”

Nixon has been Rock Hill’s ace since her freshman season. Although she pitches almost every game, she rarely bats in an effort to protect her from injury.

Her status as a hitter might change this season due to graduation losses. Bradshaw prefers her pitchers not to bat, but she doesn’t rule it out.

“We’ll see how she does this year,” said Bradshaw with a grin. “When I was in school one of our pitchers was one of our best hitters.”

Bradshaw — a Northwest graduate — played college softball at Wright State and was named the team’s Most Valuable Player and outstanding defensive player her senior season. She understands the importance of playing good defense.

“(Nixon) fields her position well. Being a good pitcher and fielding the position is a real plus,” said Bradshaw.

Nixon admits she doesn’t have the blazing fastball of some pitchers, but she knows how to pitch and change speeds. Nixon said she spends her pre-game getting mentally prepared and let’s her physical abilities take over during the game.

“Right before the game is when all that (strategy) is going through my head. During the game I don’t think about it and I do a lot better,” said Nixon.

Bradshaw said Nixon’s pitching approach is perfect for the next level.

“When you get to college, the hitters catch up to you. Pitchers don’t throw it by you. Hitting spots and changing speeds are more important,” said Bradshaw.

Buckeyes, Spartans not after hardware