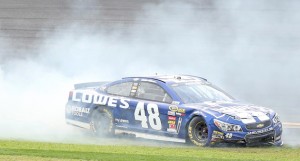 DAYTONA BEACH, Fla. (AP) — A big first for Danica Patrick, but an even bigger second for Jimmie Johnson.

Patrick made history up front at the Daytona 500 Sunday, only to see Johnson make a late push ahead of her and reclaim his spot at the top of his sport.

It was the second Daytona 500 victory for Johnson, a five-time NASCAR champion who first won “The Great American Race” in 2006.

“There is no other way to start the season than to win the Daytona 500. I’m a very lucky man to have won it twice,” said Johnson, who won in his 400th career start. “I’m very honored to be on that trophy with all the greats that have ever been in our sport.”

It comes a year after Johnson completed only one lap in the race because of a wreck that also collected Patrick, and just three months after Johnson lost his bid for a sixth Sprint Cup title to go two years without a championship after winning five straight.

“I would imagine pretty much anyone would be kicking themselves about what they coulda, shoulda have done to give themselves an opportunity to win,” she said. “I think that’s what I was feeling today, was uncertainty as to how I was going to accomplish that.”

There were several multi-car crashes during the race, none approaching the magnitude of the wreck that injured more than two dozen fans a day earlier in the second-tier Nationwide Series race on the same track. Daytona International Speedway workers were up until 2 a.m repairing the fence that was damaged in the accident, and track officials offered Sunday morning to move any fans who felt uneasy sitting too close to the track.

Several drivers said the accident and concern for the fans stuck with them overnight and into Sunday morning, and Johnson was quick to send his thoughts in Victory Lane.

“Me personally, I was just really waiting to get the news on how everybody was, how all the fans were overnight, just hoping that things were going to improve … was not really ready to proceed until you had some confirmation that things were looking more positive,” said Dale Earnhardt Jr., who was involved in Saturday’s accident but refocused and finished second to Johnson, his Hendrick Motorsports teammate.

The race itself, the debut for NASCAR’s new Gen-6 car, was quite similar to all the other Cup races during Speedweeks in that the cars seemed to line up in a single-file parade along the top groove of the track. It made the 55th running of the Daytona 500 relatively uneventful.

When the race was on the line, Johnson took off.

The driver known as “Five-Time” raced past defending NASCAR champion Brad Keselowski on the final restart and pulled out to a sizable lead that nobody challenged over the final six laps.

“We have a hard time finishing these races. Boy, to run 1-2, man, what a day,” said Rick Hendrick, team owner for both Johnson and Earnhardt.

Mark Martin was third in a Michael Waltrip Racing Toyota. Keselowski, who overcame two accidents earlier in the race, wound up fourth in Penske Racing’s new Ford. Ryan Newman was fifth in a Chevy for Stewart-Haas Racing and was followed by Roush-Fenway Racing’s Greg Biffle, who was second on the last lap but was shuffled back with Patrick to finish sixth.

Regan Smith was seventh for Phoenix Racing, while Patrick, Michael McDowell and JJ Yeley rounded out the top 10.

Patrick was clearly disappointed with her finish, even though she ran inside the top-10 the entire race. When the race was on the line, though, she was schooled by Earnhardt, who made his move for the win.

Still, Patrick became the first woman in history to lead laps in the 500 when she passed Michael Waltrip on a restart on Lap 90. She stayed on the point for two laps, then was shuffled back to third. She ended up leading five laps, another groundbreaking moment for Patrick, who in 2005 as a rookie became the first woman to lead the Indianapolis 500.

Janet Guthrie was the first woman to lead laps at NASCAR’s top Cup Series, in 1977 at Ontario, where she led five laps under caution.

“Dale did a nice job and showed what happens when you plan it out, you drop back and get that momentum. You are able to go to the front,” Patrick said. “I think he taught me something. I’m sure I’ll watch the race and there will be other scenarios I see that can teach me, too.”

“She’s going to make a lot of history all year long. It’s going to be a lot of fun to watch her progress,” said Earnhardt Jr. “Every time I’ve seen her in a pretty hectic situation, she always really remained calm. She’s got a great level head. She’s a racer. She knows what’s coming. She’s smart about her decisions. She knew what to do today as far as track position and not taking risks. I enjoy racing with her.”

The field was weakened by an early nine-car accident that knocked out race favorite Kevin Harvick and sentimental favorite Tony Stewart.

Harvick had won two support races coming into the 500 to cement himself as the driver to beat, but the accident sent him home with a 42nd place finish.

Stewart, meanwhile, dropped to 0-for-15 in one of the few races the three-time NASCAR champion has never won.

“If I didn’t tell you I was heartbroken and disappointed, I’d be lying to you,” Stewart said.

The next accident — involving nine cars — came 105 laps later and brought a thankful end to Speedweeks for Carl Edwards. He was caught in his fifth accident since testing last month, and this wreck collected six other Ford drivers.

The field suddenly had six Toyota drivers at the front as Joe Gibbs Racing and Michael Waltrip Racing drivers took control of the race. But JGR’s day blew up — literally — when the team was running 1-2-3 with Matt Kenseth, Denny Hamlin and Kyle Busch setting the pace.

Kenseth, who led a race-high 86 laps, went to pit road first with a transmission issue, and Busch was right behind him with a blown engine. Busch was already in street clothes watching as Hamlin led the field.

“It’s a little devastating when you are running 1-2-3 like that,” Busch said.

Jim Walker jim.walker@irontontribune.com   CHILLICOTHE — In a test of wills, the Fairland Dragons got more than a passing grade.... read more