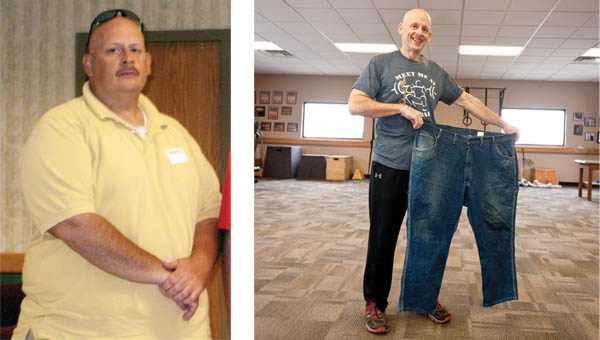 Weighing in at 387 pounds, Mark Moore candidly admits that there was a time when his main — in fact, his only — hobby was eating.

“I would come home and sit down in the Lazy Boy recliner and then go to bed,” Moore said. “You hate to move, to do anything that requires you getting up.”

The battle with weight had plagued the 49-year-old Ironton man all his life and there was many a diet Moore had tried with short-term success. Take 100 pounds off. Then watch it quickly come back on his 5-foot-10 frame.

“It was all from poor diet,” he said. “I don’t lay any blame on my parents. They were of the old-school country cooking where you cleaned your plate or you didn’t get to go out and play.”

In that world, food was more than fuel and nourishment. It was a way to celebrate. And, for decades, Moore did a lot of celebrating.

Even after he had back surgery 12 years ago to remove 40 percent of the Lumbar 5 disc he had hurt in a fall, Moore couldn’t change his ways long-term.

Then, almost two years ago, his back started bothering him again. He checked in with his doctor who said what he needed was, not more surgery, but a stepped-up regimen of physical therapy to strengthen his core muscles.

“If those muscles are not strong, the spine is not lying in the proper position,” Moore said.

That’s when Moore met Dave Coburn, director of physical therapy at Tri-State Rehab in Ironton. In fact, Moore can tell you exactly the moment when his life changed — June 5, 2011.

That’s when Coburn teamed up with a group of early risers who came to the center at 4:30 a.m. three days a week to teach Moore the most beneficial way to exercise.

Now at 182 pounds, the lean and trim Moore not only knows how to exercise, he craves it.

“It starts your day,” he said. “The days you don’t come in, when you miss, you feel worse than if you do come.”

The secret, as Moore sees it, is that this kind of exercise is circuit training.

“It is a lot of repetitions,” he said. “You don’t stop. It is continuous. It is functional exercise. You try to take in every muscle of the body.”

Moore will work on a routine where he will do five different exercises of 10 repetitions each.

“You see how many of that circuit you can do in 25 minutes,” he said.

According to Coburn, there are three key ingredients that makes circuit training so effective.

“First, you are constantly changing, always shocking the muscles and never doing the same routine,” Coburn said. “Your muscles adapt real easy to workouts. If you change, you get more out of it.”

The second factor is that circuit training keeps your heart rate up, meaning you burn more calories.

“Instead of doing a set of curls and waiting for five minutes,” Coburn said. “And it is functional. It is normal activity. It is things you do every day instead of when you stand and do bicep curls. If you need to move a couch, you will be able to do it. You are moving more than one joint at a time, squatting, stooping and lunging.”

While Moore thrives on exercise now, when he started he wasn’t so sure he could cut it.

“The first week Dave took it easy on me,” he said. “The next week I thought, ‘I won’t be able to do it.’ But it is a group of guys who never discourage, never ridicule. It is a really encouraging group of people. Exercise changes the physical makeup of your body. You build muscle mass. A lot of people lose weight, but don’t build muscle.”

But just as important as exercise has been the way Moore looks at food.

“I changed how I eat,” he said. “It was a mindset I had to change. I would go to a family dinner and they would say ‘You can eat this.’ Yes, but I don’t want to. They are not meaning to be destructive. We equate eating with happiness. I can eat it if I want to. I have every right to. I am choosing not to.”

Moore understands now that a candy bar only gives the body 30 minutes of fuel.

He also understands that losing weight doesn’t take a magic formula, just a desire to make the commitment.

“If I can do it, anybody can do it,” Moore said. “I am not anybody special. You don’t have to be an athlete. You have to do it for yourself. It’s because I wanted to.”