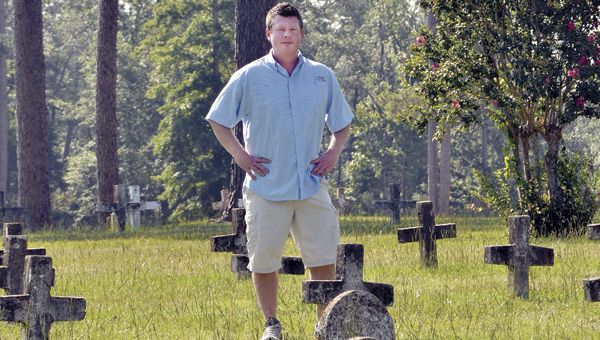 Ironton man tells stories of those buried in prison cemetery

While running by a graveyard more than a thousand miles away from his hometown of Ironton, Frank Wilson began wondering what circumstances could lead to someone’s life ending in a remote pauper’s graveyard in southeast Texas.

An Ironton High School and Ohio University Southern graduate, Wilson was pursuing his Ph.D. in criminal justice at Sam Houston State University in Huntsville, Texas when he said a professor there suggested he do some figurative digging.

“Dr. Dennis Longmire in the College of Criminal Justice had suggested that I explore who was buried there as a dissertation topic,” Wilson said. “While I chose another topic, the idea never left my mind. Furthermore, my mother and stepfather had visited me in Huntsville, and despite trips to NASA and others places in the region, the one thing my mother always remembered was the Captain Joe Byrd Prison Cemetery. It imbues one with a lasting impression not unlike that of Arlington Cemetery.”

And that lasting impression eventually turned into a fire that caused Wilson to return to his old running ground and seek more information about the cemetery.

The 22-acre cemetery has been the final resting place for unclaimed Texas inmates for more than 150 years. Fascinated with the idea of how one becomes a resident of a penal institution, and then to go as far as to be buried with other unclaimed prisoners, Wilson started the project he ignored for his dissertation. He began to write about the people whose names were carved onto the headstones he used to run past.

“This book is different in that it will illuminate the common ground we all have with the prisoners buried in the cemetery,” Wilson said. “Those who will be portrayed in it will provide a snapshot of America’s past, present and future. The readers will be able to find the commonalities, as I have, with those who are buried in the cemetery. In this cemetery you not only find Indian chiefs, circus performers, horse thieves, serial killers, country music singers and rodeo stars, but you also find veterans from WWII, Korea, Vietnam, and the Middle East as well as war heroes including Purple Heart and Bronze Star recipients, children of single parents, people raised in working class communities, former factory workers and so many others.”

Wilson’s book has brought him national attention. The New York Times wrote an article on prisoner burials in Texas and quoted Wilson.

He said, while most assume those laid to rest in prison cemeteries are bad people, it is more a reflection of one’s socioeconomic status.

“Since the Texas prison system started burying inmates on this piece of land around 1850, the majority of those buried in the cemetery are there not because they were unwanted, but because their families could not afford to bring them home,” Wilson said. “The cemetery’s other name, given to it by the inmates, ‘Peckerwood Hill’ essentially means poor and unwanted. Based on my discussions with former Texas Department of Criminal Justice wardens and personnel, TDCJ makes extensive efforts to locate family members of the deceased and most of the time the family simply cannot afford to bring the family member home. I think it is safe to say the normal knee-jerk reaction by the general public would be to assume that those buried in the cemetery must have been horrible people to end up there.”

Further, the fact that the execution chamber for the state of Texas is located less than two miles away from the cemetery many wrongly assume that most of those buried there are those who were executed.

“In fact, the executed only make up around two percent of the graves. Many who are buried there committed victimless crimes and are clearly missed by loved ones, as is evidenced by the family members who attend funeral services and by the flowers that are regularly placed on the graves.”

And it is this fact the man who is now a professor of criminal justice as Indiana State University focuses on.

“The fact of the matter is that those who are buried there are for the most part, a clear reflection of who we imprison in our country, the poor,” Wilson said. “Further, given that the cemetery dates back to 1850 and that over half of the 3,000 burials occurred after 2000, as a criminologist I can tell you that this is a reflection of the war on drugs, the demand for longer prison sentences and subsequent growing elderly population in our prison system.

“Based on my research, each year since the 1990s, approximately 100 inmates have been buried in the cemetery, at least until this last year. When I returned to the cemetery in the summer of 2012 I found that in the past year nearly 200 inmates had been buried in the cemetery. In this past year we have seen a distinct increase in the number of paupers’ graves in the civilian world and it would appear that the tough economic times are also reflected in this prison graveyard as well.”

It is perhaps Wilson’s upbringing that helps him see the prison graveyard and those buried there with unassuming eyes. Wilson said he learned many things growing up in Ironton, some good and some bad, but the main lesson still holds true: Do what you can to help those in need.

“I can remember my mother and other city employees going without pay to help bring the city out of debt and holding potluck dinners to make sure everyone had enough to eat,” Wilson said. “I can remember Lamar and Joyce O’Bryant leading the congregation of Sharon Baptist Church to provide food and clothing to those in need, as was the case with most churches in Ironton. The people of Ironton, for the most part, reached out to help those in need.

“So I guess growing up there helped instill in me a sense of social responsibility to help those who may not have a voice. Many of those values I still carry with me as a college professor. I, as a first-generation college student, understand what it is like to work a full-time job or to have to join the Army Reserve in order to pay for my college. As a result, I can often times closely relate to other first-generation college students. Most importantly, with regards to this book, I am able to see the prisoners buried in the cemetery as human beings rather than someone that ‘got what they deserved’ as many may believe.”

Wilson said it is the combination of his upbringing and education showing him just how little he knew of the world before he left Ironton that has helped shape him into who he is. His educational pursuits have garnered him friends from many countries and with a myriad of religious and political backgrounds. That has made him realize everyone is more similar than different.

Wilson said the most common similarity, which he believes is at the core of what he is doing, is compassion.