PROFILE 2013: Citizens of the Year 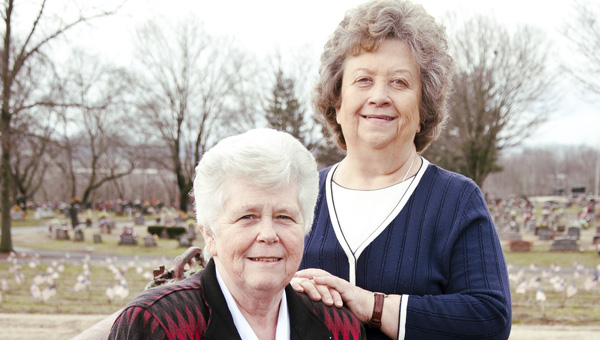 Linda Dalton, left, and Juanita Southers were named The Tribune’s Citizens of the Year for their efforts to bring Wreaths Across America to Lawrence County.

Two women, friends for not all that many years, spent a few days before Christmas in Washington, D.C., not really having an agenda, just to see the sights.

Asked if they would like to go to Arlington National Cemetery for a special, solemn event they had never heard of, they thought, “why not.”

Never did Juanita Southers, a one-time pre-school teacher, and Linda Dalton, a stay-at-home mom, think that visit would inspire them to bring the event back home. But, in doing so, they have showcased the Ironton community’s sense of pride and appreciation for the men and women who have served their country in the armed services.

For their enthusiasm, dedication and perseverance in bringing Wreaths Across America to Lawrence County, Juanita Southers and Linda Dalton are The Tribune’s 2013 Citizens of the Year.

“My daughter invited us up for Christmas and took us to Arlington,” Southers said.

That was her introduction to Wreaths Across America, where on a specified Saturday in December, volunteers decorate with live wreaths the graves of fallen veterans in 600 cemeteries across the country in ceremonies held simultaneously. The wreaths remain on the graves for one month.

“We were coming out of the cemetery right at the bottom of the hill and there was a family burying a young man, 21, 22 years old,” Southers said. “I remember looking at his mother and father and something about that touched my heart.”

That’s when the two women started working to raise funds, with the goal of getting enough money to pay for wreaths to cover the veterans section at Woodland Cemetery.

That meant speaking to community groups, going to chamber of commerce meetings, any place Southers could get a chance to spread the word. And it was usually Southers doing the speaking. That’s because Dalton candidly admits getting into the public spotlight isn’t for her.

“Juanita is the main spokesperson,” Dalton said. “I tell her I am right behind her. I help her.”

The two met several years ago when Southers was looking for a musician to hire to play for her church. She found Dalton’s son, Levi.

“She hired my son to play piano at her church and as the years went by, we got to doing more things together,” Dalton said.

The two of them are “country girls,” Southers said. “It was like a friendship that was meant to be.”

So the two women were of the single mind that Wreaths Across America must come to Woodland. That meant Southers spent hours explaining the project to people, most of whom had never heard of it, to get as much money as they could to pay for as many wreaths as they could afford.

That she would put this much effort into the project is an example of the kind of person Southers is, says Annette Cooper, who has known the woman since she taught Cooper’s children more than 25 years ago.

“That was just a selfless endeavor,” Cooper said. “She had no one buried at the veterans’ plot, nothing to gain by doing this. She is just a giving person. She helped me out so many times when my children were little. Some people in life are givers and some are takers. She is a giver.”

Their goal was to mark every one of the 950 graves at the veterans’ section with a wreath. They came close, stretching the 300 wreaths they were able to buy over 600 graves. Those wreaths were placed on the graves during a special ceremony on a cold December afternoon where representatives from every branch of the military, including a prisoner of war, spoke.

Deb Hagerty, an Air Force veteran and representative of the David Malone Memorial AmVets Post 5293, was at that ceremony.

“I thought they did a miraculous job,” Hagerty said. “I have set up a lot of programs before and it takes years to get something like that organized. I felt the union and strength between the different veteran organizations. Sometimes each different organization is in competition with each other. But we all came together as brothers and sisters. It was very overwhelming, very powerful. It was awesome and it brought tears to my eyes.”

Radio personality J.B. Miller missed the ceremony, but he was there helping out when the wreaths were removed a month later.

“To put a wreath on the grave of a soldier, I think that is absolutely awesome,” Miller said. “I think soldiers’ plots look so sad. Soldiers who have never been able to have their graves decorated, how cool that someone took the initiative to say, ‘we need to do this.’

“Removing those, it was on a cold day, but I was warm because of what was running through my veins. I can’t wait to do it again.”

Already the two women are working on this year’s ceremony and are confident they will get enough funds to mark all the graves in the soldiers’ plot.

“People are getting more patriotic,” Southers said. “People are just now starting to realize that we have, I think, the greatest country in the world. People are just now starting to appreciate what other people have done for us to be able to enjoy the freedom that we have. This brings to the forefront that we didn’t get all these freedoms just because they are there. We have them because lots of people gave their lives that we might have them.”