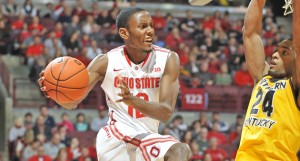 COLUMBUS (AP) — There’s something about traveling to Northwestern that seems to summon problems for the Ohio State Buckeyes.

A year ago, the Buckeyes were ranked 10th and the Wildcats were headed for a losing record in the Big Ten. Yet it took Jared Sullinger’s banked-in turnaround with 3.1 seconds left for Ohio State to escape with a 75-73 win.

In 2011, the Buckeyes were 22-0 and No. 1 in the nation while Northwestern was just 3-6 in the conference. This time, David Lighty made a late steal and Sullinger hit a foul shot in a 58-57 white-knuckler.

“The last two times it really came down to the last minute,” Ohio State forward Sam Thompson said on Wednesday.

It won’t take much to remind them of how dangerous the Wildcats can be.

Just two weeks ago Northwestern came to Value City Arena and set the pace and controlled the game for most of the first 35 minutes. But the Buckeyes strung together a late 12-0 run to pull out a 69-59 win that might mislead some to thinking they were more in control than they actually ever were.

Asked why every game at Welsh-Ryan Arena seems to tilt on one play, Ohio State coach Thad Matta was at a loss.

From the outside, there’s no way that the Wildcats should be hanging with any of the elite teams in the Big Ten. After all, they’ve lost several top players to injury and had only seven scholarship players available for the close loss at Ohio State.

One thing that wily coach Bill Carmody has in his corner is his version of the Princeton offense, a precision attack that forces opposing teams to play defense until the shot clock is winding down. A typical set might entail a dozen passes around the perimeter as the Wildcats probe the opposition to see if they can spring a player free with a pick for an easy backdoor layup.

If they can’t get the closest of shots, they’ll settle for the longest — pumping up 3s to turn the game into a long-range shooting exhibition.

It’s something that Big Ten opponents aren’t accustomed to seeing — an amazingly patient team content to wait for the right shot.

Adding to the problems of playing against such an offense is that just about everybody else in the conference likes to race up and down the floor and score in transition, then hurry back and play a few seconds of defense against a team trying to do the same thing. No one likes to be vigilant on defense for 35 seconds at a time, hoping to not get embarrassed by a wide-open Wildcat dunking behind them.

Barring a shocking series of upsets in the Big Ten tournament, Northwestern (13-15, 4-11) will extend its unwanted distinction of being the Division I team that has waited the longest to play its first NCAA tournament game.

The Buckeyes have not forgotten how close they came to losing the first meeting. Since it’s only been 14 days since the Buckeyes were bedeviled and beguiled by the Wildcats’ version of the Princeton offense, it remains fresh in their memory.

“Guys remember that offense,” said Thompson, a Chicago native who has a large group of friends and family coming to the game. “We were able to really get good perspective in film of what the coaches were talking about just because we had played them so recently. That’ll definitely help us.”

Ohio State still has a major goal of grabbing one of the four first-round byes in the Big Ten tournament. It also wants to burnish its NCAA resume.

The Buckeyes haven’t lost at home to Northwestern since 1977, a string of 29 consecutive wins in Columbus. In Evanston, Ill., however, every single game seems to be a trap.

“You’re attempting to bring it every single night, but everybody forgets the other team is bringing it, too,” Matta said. “You look at the schedule and you’re saying, ‘Boy there’s none that I know we’re going to win if we just show up.’ That’s what makes it challenging.”

Jim Walker jim.walker@irontontribune.com   POMEROY — Turnovers proved to be a real turn off for the Symmes Valley Vikings. The... read more