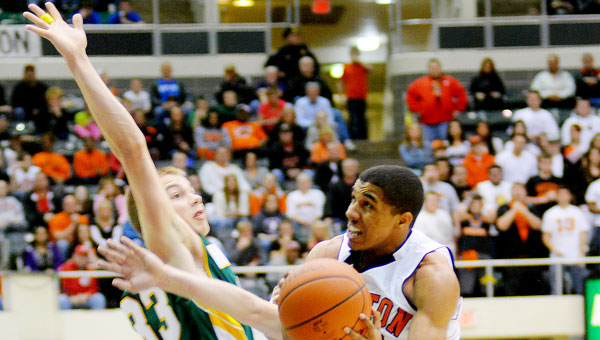 ATHENS — Any thought North Adams had of upsetting the Ironton Fighting Tigers was erased quickly and emphatically.

“I thought our kids played so hard. We had such good chemistry. The kids played well together and shared well,” said Ironton coach Mark LaFon.

Ironton had 14 assists with 10 different players handing out a scoring pass. The Fighting Tigers came away with 18 steals.

“The main thing this week was focus, focus, focus,” Carter said. “That’s what we’ve been practicing all week. So praise our defense a lot. It was one of the best defensive efforts we’ve had.”

Ironton (20-2) plays Zane Trace in the district finals at 9:30 p.m. Friday at Ohio University. The Pioneers defeated Lynchburg-Clay 59-45 in the late game.

It was the Green Devils’ only lead and only real highlight.

Ironton went on a 14-0 run the rest of the quarter as Carter scored nine points including a 3-pointer.

After a 3-point play by Will Leasure got North Adams (13-11) within 14-5, Ironton took over as Carter scored nine more points including another trifecta.

Ironton dominated the boards in the first half 24-9. The Fighting Tigers had 12 offensive rebounds and North Adams had just one team rebound when a ball was knocked out of bounds.

For the game, Ironton outrebounded North Adams 42-21 including 18-5 on the offensive glass.

“We knew they were a good team if their two guys inside played well. We neutralized that. We took away the post game. That’s why we were able to pressure the guards,” said LaFon.

Things went from bad to horrendous in the second half for the Green Devils.

A putback by Fletcher gave Ironton a 58-18 lead with 57 seconds left in the third quarter and it was 60-23 at the end of the quarter.

The Fighting Tigers outscored the Green Devils 7-2 to start the fourth quarter and at one time built a 75-27 lead on a on a pair of layups by Darrius Boykin, two free throws by Jake Long and a layup by Tristan Cox.