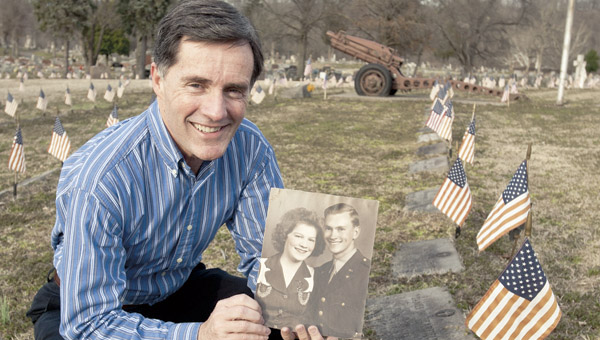 The gravestone he had been searching for was dirty, so he cleaned it off and took a second look at the name chiseled across the stone — Clarence Raymond Stephenson Jr., As he wiped the dirt off his fingers, his eyes lingered on the middle name, the name they shared.

Raymond O’Conor drove hundreds of miles to Ironton from his home in Saratoga Springs, N.Y., to see the grave and attempt to gather information on the man he only recently found out he was named after.

“The way this all started was seven years ago, on my mother’s 80th birthday. We traveled down to Long Island where my mother’s home was,” O’Conor said. “At some point in the day she pulled me aside and said ‘Raymond, come to the bedroom with me, I need your help with something.’ So we sat down and she reaches into a drawer and pulls out a wooden box. From this box she pulls out what appeared to be a very old letter. She said she wanted me to read something, so I pull this letter out of the envelope and the salutation reads ‘My Dearest Darling.’

The story begins in the summer of 1942, as young Stephenson is in New York training to be an aviator in the Army Air Corps. During this time, O’Conor said his mother was living in Hell’s Kitchen, Manhattan, when she bumped into the dashing young man in Central Park.

If you want to hear a story of love at first sight, this is the one to hear, O’Conor said.

Before coming to Ironton to learn more of Stephenson from his hometown, O’Connor traveled to Michigan to meet with Keith Clinton, the last living member of Stephenson’s flight crew.

“Back in March of last year I was sitting in my office and I think I’ve tracked down the right Keith Clinton, but I wouldn’t know for sure until I called him,” O’Conor said. “I called and someone picks up the phone and this old gravelly voice answers ‘helloo.’” I asked if this was Mr. Keith Clinton and answered ‘yup, who’s this?’ I said, ‘Mr. Clinton, my name is Ray O’Conor. You don’t know me, we’ve never met but a real long time ago you met my mom. My mom is the widow of Ray Stephenson, your pilot in World War II.’ He paused for a minute and then asked ‘How’s Helen doing?’ And I told him mom was doing just great.”

After talking for awhile, O’Conor said he asked Clinton if he could come to see him. He said when Clinton asked him what he was doing Saturday he told him Friday he would be getting ready to get on a plane. So he headed out to Michigan where he met with Clinton. While there, O’Conor said Clinton was a great source of military information. They discussed missions, looked at old flight records and Clinton shared stories of bygone days.

O’Conor went to see Clinton again last summer and a few months after that made a life altering decision: To retire early and commit himself full-time to writing a book about the man whose name he carries and the woman his namesake loved.

“As I started getting ready to write in earnest, I’m thinking I need some advice, a direction to go in to make sure I’ve got my head on straight,” O’Conor said. “I thought, gosh, James Bradley would be a good person to talk to.”

Bradley is the New York Times bestselling author of “Flags of Our Fathers,” a book which focuses on the six men who raised the iconic flag at Iwo Jima.

Going through a friend of his who knew Bradley’s agent, O’Conor was eventually able to get a chance to speak with Bradley about his plans to write a book telling Stephenson’s story.

“I spent an hour and a half on the phone with James Bradley,” O’Conor said. “And he is just telling me about what he did when he first started writing “Flags of Our Fathers.” the research he did and how it took him four years to get everything together. He talked about how he traveled all over the country talking to the guys who raised the flag. It’s just an amazing story.”

When he asked Bradley what message he was trying to get across when he wrote the book, O’Conor said Bradley said not to worry about that, just write the book, tell the person’s story and people will get from the book what they get from it.

And that is what O’Conor is seeking to do, he said. And just like Bradley, the mission is taking him all over the country in pursuit of information to add life to his future novel.

While in Ironton to gather information on Stephenson, O’Conor visited the home he grew up in and spoke with a neighbor who remembered the family. She did not remember Stephenson because she moved in after he had left for the war, but O’Conor said she had nothing but nice things to say about the family.

After he left Ironton, O’Conor went to Akron to meet with Stephenson’s youngest sister, Ruth. While there he discovered Stephenson kept a diary which mentioned his first meeting with the woman he said would change his life.

The following are three of the entries from Stephenson’s diary.

When Stephenson proposed to Helen she said she would love to, but she could not just then because she was only 17 years old, said O’Conor.

On her 18th birthday, Sept. 6, 1943, they travelled to Ironton to be married in the rectory of St. Lawrence Church.

Exactly one year after they were married, Sept. 6, 1944, Raymond was killed in action.

He never saw his wife again. He never laid eyes on his daughter.

“I, of course, knew my mom was married before, but it was never brought up,” O’Conor said.

“She remarried about 10 years after her first husband died and, out of respect to my father, it was never discussed. He always thought I was named after his uncle.”

O’Conor said the first Stephenson’s family in Ohio knew of Helen was when Clarence brought her down to be married. Despite geographical and religious differences, Stephenson’s family were devout Protestants while Helen’s family were devout Catholics, the families liked the people and approved the marriage, O’Conor said. So much so that when O’Conor left Akron to travel to Springfield to visit Stephenson’s oldest sister Marjorie, he mentioned she had hoped he was bringing Helen and Ann with him.

“Marjorie saw Helen and Ann three times after Raymond’s death,” O’Conor said. “They visited once when Ann was just a baby.  They made a second visit when Ann was about 5 years old and the last time she saw Ann was when Ann was about 15 years old.  Marjorie’s oldest son, Randy, was at the house when I visited and said he remembered Ann’s visit because she loved rock and roll music and taught Randy how to dance. The last time Marjorie saw Helen was in 1973.”

After meeting with Marjorie, O’Conor hit the road to return home to New York. He said his trip to Ohio has been an amazing one. Along the way he has met wonderful people and shared his story with all who would listen, more than a few who did not have dry eyes when the telling was done, he said.

O’Conor is still seeking information about Stephenson from those who knew him, either as a boy in Ironton or a pilot during WWII. He asks anyone who can help to contact him at moconn14@nycap.rr.com.