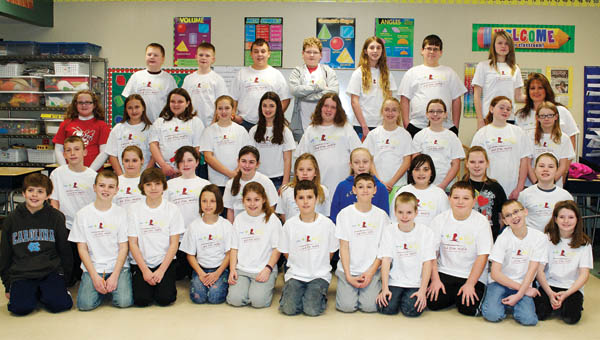 DEERING — For weeks, students at Dawson-Bryant Elementary School have been roaming the hallways and the streets of their communities, asking people to help them in their quest to donate to children in need.

The students are participating in the school’s third annual Math-A-Thon. The event revolves around students volunteering to give their time to sharpen their math skills for a good cause. Participants gather patrons to sponsor them for completing math problems in a book provided by fifth grade math teacher Donna Wagner.

“When they turn in the money I give them the fun book to do their problems,” Wagner said. “When they are done with that, we check their answers. There’s no pressure on the fun book. It’s just that, fun.”

Wagner said the book itself, and the problems within are not the focus of the Math-A-Thon. She said the key element is the donations received for St. Jude, and the students do the problems because they get caught up in honoring their sponsors and helping the children of St. Jude.

The participants do receive extra credit and other incentives for problems completed, Wagner said. They also received $35, T-shirts and St. Jude book bags for their efforts in the Math-A-Thon.

The top three raisers of the event, Halley Booth, Jordan Venatter and Reece York gave no hesitation when saying their main motivation was simply to help the children at St. Jude. York even donated all the stuff he received, with the exception of his T-shirt, back to St. Jude, a first, Wagner said.

“I just wanted to help the kids with cancer,” Reece said. “I wanted the T-shirt because it said I did the Math-A-Thon for St. Jude.”

Halley, who took the top raiser title after a large last minute donation, said the T-shirt was also her favorite thing received from the Math-A-Thon.

“I liked what it said,” Halley said. “I also wanted to help the kids with cancer and want to thank my dad’s boss and other sponsors who helped us raise the money.”

Jordan, who led the pack for most of the fundraising event, said the T-shirt was a big thing for him as well.

“I’m going to wear it next time I go to a football game,” Venatter said. “I just wanted help the kids. It’s sad how they are and I want to thank them for letting us try and help. I hope they get better.”

While he fell just short of being the top raiser in the end, Wagner said Jordan showed the most enthusiasm.

“He brought me money everyday, instead of bringing it in all at once like the other students,” Wagner said. “We had a running total just going and going. I think he hit up every teacher in this building.”

Not only did the event help them raise money for what they said was a good cause, the students agreed doing the math problems for fun, without pressure on grades, helped them with their math skills. York said he has not done too well this year in math, and felt the Math-A-Thon helped him get better.

Wagner said they almost doubled their goal of $1,700 and students raised more money this year than the previous two they have had the event.

In the past the Math-A-Thon was only open to fifth-graders, but Wagner said she opened it up to a few fourth-graders this year to get them excited for next year.