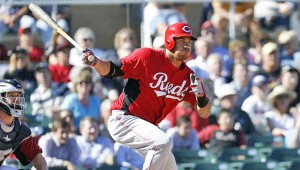 Although he is not expected to make the 25-man Major League roster, irst baseman Donald Lutz has impressed manager Dusty Baker this spring. (Photo Courtesy of the Cincinnati Reds.com)

If Donald Lutz was supposed to be a secret floating around the Cincinnati Reds’ spring training camp, manager Dusty Baker can forget ever being hired in a national security job.

Baker has been impressed this spring with the play of Lutz and he is telling anyone who will listen about the outfielder’s hitting prowess.

“I like Big Lutz. He’s very talented. He’s very raw. He’s coming fast. I like what I see. I like his speed for a big man. He works hard in the outfield and in batting practice,” sadi Baker.

Lutz, 24, was born in Watertown, NY, but grew up in Germany. He didn’t begin playing baseball until he was 16 but he played in the German Baseball Bundesliga, the elite level in the country. He signed as an international free agent from Germany in 2007.

“It’s basically all new to me,” said Lutz. “I never went through high school and college with baseball, so everything is new and exciting.”

Since then he has played in the minor league and has only played 40 games above the Class A level. Last season in the minor leagues, Lutz batted a collective .269 playing for three different teams. He hit 22 home runs with 71 runs batted in and 25 doubles.

“I know I an hit, but I’ve got to slow everything down. I need to go up there with an approach instead of just trying to hit everything out of the park,” said Lutz.

“I’ve got to realize that I don’t have to use my whole body and swing as hard as I can go get it out. I’ve got to use the whole field and become consistent.”

In the previous two seasons, he’s hit 23 and 25 home runs playing in just 107 games due to a strained oblique last year.

“He’d be further along if he hadn’t go hurt. He’d be ready for Triple-A,” said Baker who expects Lutz to begin in Class AA Pensacola this year.

“Wherever he starts, he elevates fast. He has a great attitude. He likes to compete and he works hard,” said Baker. “There’s going to come a time when he’ll put pressure on the organization to do something.”

With Joey Votto entrenched at first base and Neftali Soto rated the next best first baseman in the organization, Lutz is making the transition to the outfield that will allow him to push his way through the minors.

“He ain’t messed up yet. You know how I love defense, but it’s getting harder and harder to field bats,” said Baker. “I told you what my roommate said, ‘You shake a baseball tree and about 100 gloves will fall out and two bats.’”

CINCINNATI (AP) — The Bengals have agreed to a two-year deal with running back Cedric Peerman, a special teams standout... read more