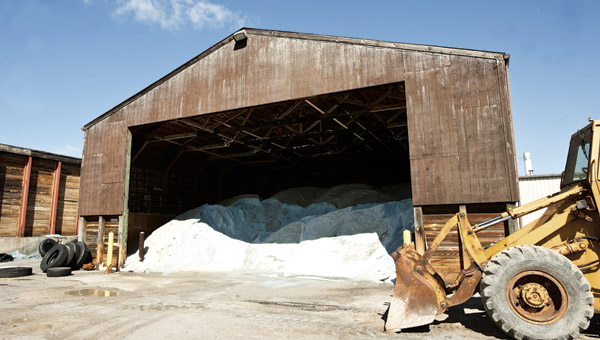 The county’s supply of salt for roads is stored in a shed on South Sixth Street in Ironton at the county garage.

Another warmer than usual winter has translated again into lower heating bills for homeowners. It also means come next January Lawrence County Engineer Doug Cade will have one less item to buy to take care of the 380 miles of county roads — salt.

Right now 1,600 tons are stockpiled in a 50-by-60 foot treated wood and steel storage shed at the garage’s headquarters on South Sixth Street.

“By April 30 we will have to purchase another 400 tons to meet our minimum quota,” Cade said. “We will store that and use it next year. I’m not going to ask for any for January 2014. We will have enough for about a year and a half.”

The county buys its salt a year ahead through a cooperative bidding agreement with the Ohio Department of Transportation. A variety of vehicles like dump trucks and material are purchased through ODOT. Salt costs $60.30 a ton.

“ODOT has already bid competitively vehicles and material for their operation,” Cade said. “Because they have competitively bid, we can take advantage of their bulk purchasing to be able to give the county a better price.”

“They give you an allowance of 80 percent or 120 percent of what you said,” Cade said.

If the order placed is for 1,000 tons but the engineer decides he doesn’t need that much, he only has to take 800 tons. Likewise, if more salt is needed, then that order can go up to 1,200 tons.

“This past year I had to buy in May and didn’t use a lot last winter so I cut it in half,” Cade said.

While county road crews were only out a few days this winter salting snowy and icy roads, part of the salt that was distributed was purchased this year and two years ago.

“Normally we use 1,000 tons a year on county roads,” he said. “When I came in as county engineer, I looked at the last five years. Typically we had 20 to 22 days of snow and ice and pretty consistently we were using around 1,000 tons each season. Last year we only had four days we had to treat roads.”

Treating snowy roadways costs the county $125 an hour for a single employee, truck and material or $10,000 to $12,000 each time the crews go out. There are 270 miles of paved roads that are treated with salt and grit, 100 miles of chip and seal roads that are treated with gravel and 10 miles of graveled roads. Typically treating the paved roads takes eight hours for the entire crew with each driver responsible for 38 miles of roadway.

“The truck drivers use their judgment on how much material to put down,” Cade said. “They are seasoned veterans and they know if it is a shaded place to put more material down. They can adjust for stubborn areas.”

As long as the salt remains under cover in the shed, it will be usable for next winter.

“You have to estimate what you will use and the variable is Mother Nature,” Cade said.

Half of those used mission for first time   Those with roofs over their heads, food in their stomachs and... read more