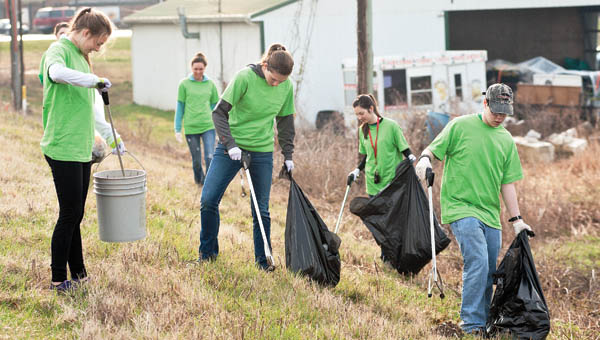 Students from Fairland High School spend their morning along State Route 7 cleaning up the roadway between Chesapeake and Proctorville.

CHESAPEAKE — Mike Scholl and his wife, Alison, were one of the first to show up at the picnic area behind the Chesapeake Community Center early Saturday morning for their initiation into Operation TLC.

Just the day before Scholl had watched someone clean up a section of Ohio 7 between Chesapeake and his Proctorville home, only to drive by it on Saturday to see new trash dumped out.

“Litter is a problem and how else will it get cleaned up if people in the community don’t do it,” he asked. “That’s what it is all about to live in a small town. This is what it is going to take, for everybody to get involved.”

Operation TLC, standing for Tidying up Lawrence County, is the brainchild and labor of love of Billie Smith and Taunya Wilson who started the operation in the spring of 2005. The goal was to turn around what they were seeing in their community – trash dumped indiscriminately up and down streets and highways.

So they set out to address the problem in a straightforward manner. They couldn’t stop the littering, but they could pick it up to stop the eyesores. And that’s what they and an ever-growing number of volunteers do three times a year.

Saturday was the first cleanup event for the organization and by starting time of 8:45 a.m. 30 volunteers were under the picnic shelter drinking coffee, snacking on donuts iced in St. Patrick’s Day green and pulling on their TLC T-shirts.

“Our area is so beautiful with the river and the mountains,” Wilson said stopping for a moment from giving out assignments for the cleanup crews. “It could be so much better. This instills pride in the community and teaches our young people.”

Almost as many teens as adults came to clean including a number of sophomores from Fairland High School like first-timer Nathan Smith whose assignment was to clean up the section by Indian Guyan.

“My friends were doing it and it is good for the community,” Smith said.

For the next three hours volunteers were out with litter grabbers, plastic gloves and huge trash bags making a difference and proving Scholl’s philosophy.

“You can’t look to somebody else to do it,” he said.

A South Point woman who failed to show up to her pretrial hearings in February is back in jail on... read more