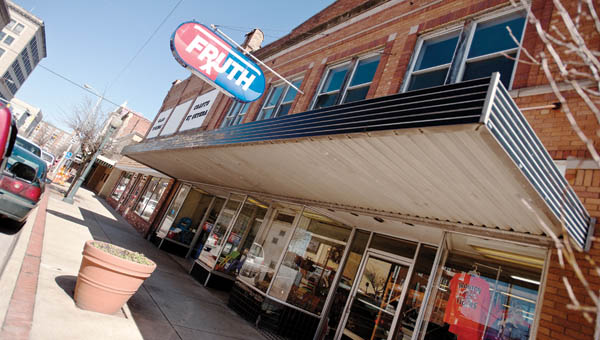 Fruth Pharmacy is now open in downtown Ironton. Customers can expect stocked shelves that include a gift section ranging from home décor to school clothing and much more.

Last week the iconic green and white Staley’s Pharmacy sign came down after decades of hanging over South Third Street in Ironton.

In its place now hangs a contemporary Fruth Pharmacy sign, transforming the space from one family-owned business to another.

Fruth Pharmacy officially opened Monday in the former Staley’s location downtown, less than two weeks after the announcement was made that the two businesses would merge.

Lynne Fruth, chairman of the board and president of Fruth, said the deal was officially closed at 5 p.m. Friday and work immediately began to transform the store.

“We said it was like one of those shows, like ‘Restaurant Impossible,’” Fruth said, referring to the Food Network reality show where dining establishments in just one weekend.

About 40 people worked around the clock to paint, put in new tile flooring, new shelving, updated lighting, install a new computer system and stock new merchandise, including food and convenience items. The entire process took about 52 hours, Fruth said, and is still ongoing.

Once back open to the public Monday, Fruth said she heard a lot of positive feedback from customers.

“The first day I heard I was stunned, shock, astonished, amazed,’” Fruth said. “… It was a pretty amazing transformation.”

A lot changed cosmetically to the store, but longtime customers of Staley’s will still see many familiar faces. Fruth said jobs were offered to all the employees and many chose to stay on.

One of those is pharmacist Mary Hannahan.

Hannahan has been a fixture behind the counter for more than 15 years and said the changes have been welcomed.

Some of the changes customers may not see, Hannahan has seen in the pharmacy area. Before, the area was divided into smaller room, but was opened up to one larger room after the merger.

The once closed pharmacy window is now opened, giving the pharmacists and the customers a glimpse at each other.

For the customers who worry that their experience at Fruth may not be comparable to Staley’s, Hannahan said they are encouraged to call or stop in with any questions.

“We would just love to have people come down and check us out,” Hannahan said.

Fruth said she hopes the pharmacy will be a welcomed addition to downtown.

“I feel good about it,” she said. “We want to be a part of the community. … There are a lot of ways we can add value to the business community.”

ATHENS — Emily Neal may not hear the same way most of her fellow 10-year-olds do, but she showed she... read more