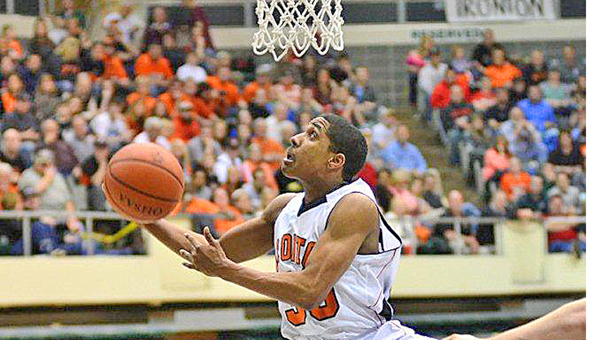 The Ironton Fighting Tigers are in the state tournament and there are three good reasons: Zac Carter, Trey Fletcher and Trevor White.

Carter was the Southeast District Player of the Year.

A 6-6 forward who was first team all-district, Fletcher scored at a 20.5 clip with 7.2 rebounds a contest. Besides his inside scoring, he shot 37 percent from the 3-point line and 55 percent overall from the floor.

The 6-2 Thompson was special mention All-Ohio as he averaged 17.4 points, 4.5 rebounds, 5.5 assists and helped the Panthers to a 62-10 record in his three years as a starter.

Markins — a 6-2 second team all-district pick — was named honorable mention All-Ohio as he averaged 17.4 points, 8.7 rebounds and 3.5 assists a game. He shot 75 percent from the line and 35 percent from behind the arc.

Barnes eclipsed the 1,000-career point plateau as he averaged 17.8 points, 3.5 rebounds and 3.0 assists a game. A second team all-district and honorable mention All-Ohio choice, Barnes shot 50.6 percent from the floor and 36.5 percent from the 3-point line.

Mahlmeister put together an outstanding career for the Flyers as he was named second team All-Ohio and surpassed the 1,000-career point milestone.

The 6-1 Rowe averaged a double-double for the Vikings as he was named second team all-district and honorable mention All-Ohio.

Jim Walker jim.walker@irontontribune.com   Contrary to the rules of poker, there is a time when a pair beats a full... read more