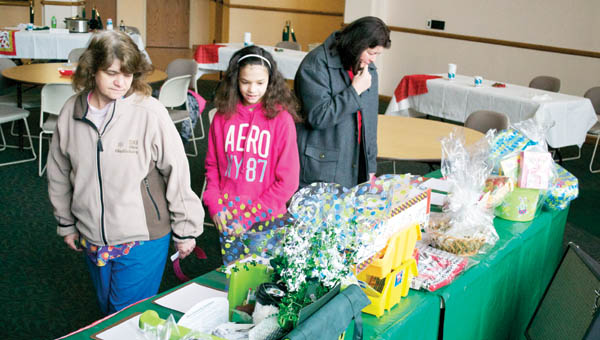 Faye Hammond, left, and her daughter Jazmine, center, check out themed gift baskets up for bid for a silent auction that was held as part of the ACTION Psychology Club’s annual Chili Cook-off Thursday in the Ohio University Southern Riffe Rotunda in Ironton.

The Ohio University Southern Riffe Rotunda in Ironton was filled with some spicy smells Thursday as the ACTION Psychology Club hosted their annual chili cook-off.

The proceeds from the fundraiser, the largest for the club, will go toward the ACTION Psychology Club Scholarship.

Hannah Wilkes, club president, said she was happy with the turnout and amount raised from the event.

“Obviously we are trying to raise money for our scholarship, but first and foremost we want people to have a good time,” Wilkes said. “We also want to help raise awareness in the community for issues of mental health.”

While the event only lasted four hours, the preparation that went into it spanned a lot longer. Rachel Banfield, club vice-president, said her, Wilkes and others spent a lot of time getting everything ready, especially the hours leading up to the event.

“We had to make the flyers, which believe it or not takes a lot of time, then post the flyers and pass them out all over campus,” Banfield said. “We had to call everyone about getting the tables, the tablecloths, get everything set up and honestly, it was just so much work but it was worth it.”

There was a lot going on at the chili cook-off.

Members of ACTION baked desserts and made sandwiches, there were themed gift baskets made for a silent auction and, of course, the main event was the chili.

There were seven slow cookers filled with chili when the event began. John Hall, a maintenance worker at OUS, was the first person to taste all seven. He said his favorite was a sweet concoction made by Nina Queen, who is also a faculty advisor for the psychology club.

“It’s good, real good,” Hall said. “I try to take part in anything like this, have a little school spirit. But honestly, I was just walking around thinking I was really hungry when someone told me they had some chili down here. It’s a good way to help out and eat.”

Queen’s chili, a recipe which involved the unique ingredient of chocolate, was a favorite of the majority of those who attended the event, winning the prize for best chili.

She said she was happy to win and planned to donate the $50 prize to the club’s scholarship fund.

The event raised over $600 for the club.

Good Friday service to feature dramatization of Passion of Christ

The annual community Good Friday service will feature Ironton clergy reading the story of the Passion of Christ from the... read more