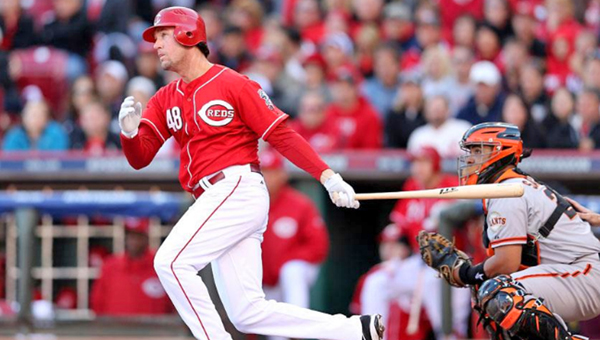 GOODYEAR, Ariz. (AP) — Edinson Volquez was wild in this warmup.

Volquez walked six in his last outing before starting the Padres’ opener and the Cincinnati Reds beat San Diego 7-3 Wednesday.

Volquez walked three in the third inning but pitched out of the jam. He was pulled after pitching to two batters in the sixth inning, allowing a single to Ryan Ludwick and walking Devin Mesoraco.

“His command got away from him in the inning he walked all the guys,” San Diego manager Bud Black said. “He came back and got the out he needed to which was great. I think he’s ready physically and mentally for Monday.”

Volquez is set to start he opener against the Mets in New York.

“My mechanics were off. I jumped a little bit,” Volquez said. “I have to work on my bullpen to stay closed. Everything was fine from the windup. It was just when I was in the stretch.”

Shin-Soo Choo’s second home run of the spring was the first hit allowed by Volquez.

Ludwick was hitting .208 when the game started. He walked and singled before he broke open a 1-all tie in the seventh.

“We got home runs but it starts with good pitching,” Cincinnati manager Dusty Baker said. “It keeps you in the game until you hit the home runs.”

Mike Leake pitched six strong innings for Reds, giving up one run and five hits. He struck out four and walked none.

“It was a good tuneup. I was keeping the ball down,” Leake said.

NOTES: The Reds reassigned LHP Wilkin De La Rosa and RHP Clay Hensley to minor league camp. … Reds RHP Jose Arredondo pitched a scoreless inning. He has allowed one run in eight innings over his last seven outings. … Padres OF Carlos Quentin singled twice. He played in back-to-back days for the first time since returning from a knee injury. … Padres INF Logan Forsythe went back to San Diego to have his right foot examined by team doctors. He has plantar fasciitis.