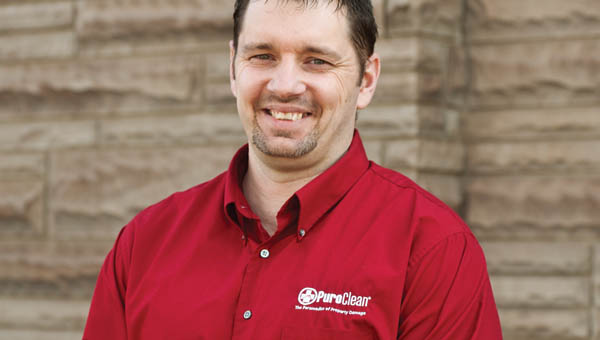 Coal Grove native Todd Brammer is now a representative of the PuroClean.

ASHLAND, Ky. — Working as a home inspector Todd Brammer has seen it all, everything from mold to fire damage, and decided he wanted to do more than just tell people they have a problem.

A little more than a year ago, the Coal Grove businessman started up his restoration business, As Good As New, and the business was good, but after some research realized buying into a franchise may be a better choice for him.

“Some jobs may have scared me when I was running my own business,” Brammer said. “I may have thought they were too big, but now, with PuroClean’s backing I can call, tell them the situation and get expert guidance.”

So, after much thought, Brammer joined the PuroClean team earlier this year.

PuroClean was co-founded in 1990 by Dick Spohn and Rory O’Dwyer in Fort Lauderdale, Fla., and operates under the motto of that the company is “the paramedics of property damage.”

“We are the first responders to your house after it has had a traumatic experience,” Brammer said. “We go out 24/7 to respond to and restore the home back to its original state.”

Brammer still runs his home inspection business, and said being both an inspector and restorer can potentially cause a conflict of interest as he can find himself restoring a home he inspected. He said he recognizes this, but sometimes the customer insists he does the job.

When this happens he said he has them sign a release form stating they are aware he was both inspector and restorer.

Because his business works in such a small area, Brammer said customer service is key. He said he realizes when he goes on a job the customers are already upset due to the situation. Because of that, he said PuroClean’s mission is simple, make the restoration as smooth as possible so the customer can get back to life as normal.

PuroClean services the Tri-State. Those seeking the company’s services can contact Brammer at 606-547-3303 or at www.puroclean.com.