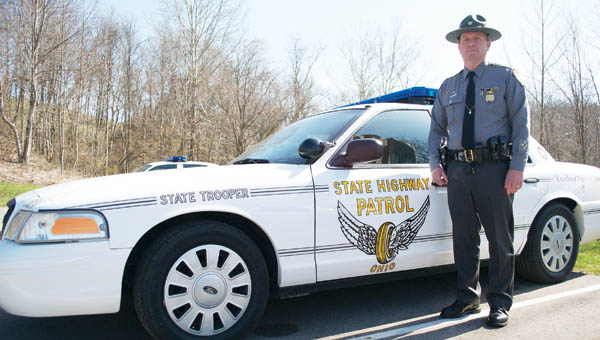 Born and raised in Gallipolis, and having spent over half his career serving at the Gallipolis Post, Lt. Barry Call is no stranger to life and work along the Ohio River.

Learning the area and building a good rapport with the troopers he leads are two of his top priorities as post commander, Call said.

“This post has a lot of similarities to my old post in Gallipolis,” Call said. “We have a good mix of veteran officers and young troopers. Everybody seems to work well together as a team, look forward to coming to work and no problems doing what we are asking them to do.”

Call still lives in Gallipolis and has about an hour drive to work each way, but he said he has always been an early riser so it does not bother him too much.

“On my way in or on my way home I try to work some traffic in,” Call said. “I don’t put blinders on as soon as I leave my house or the office. Just because I’m a lieutenant doesn’t mean I don’t have to go out and promote highway safety.”

Call said he leads by examples and expects the same from his sergeants. He said he wants to foster a professional, yet still enjoyable environment for his troopers.

The Ironton Post is unique because Ohio, Kentucky and West Virginia being so interconnected in the Tri-State region creates a different criminal element from what is common at other posts, Call said.

“One of the things I want to see happen here, and it’s already going in that direction is more of an emphasis on drug control,” Call said. “The management here at the post would like to take a stronger role, get more involved and take care of the drug couriers and drug drivers.”

Call said he sees his time at the Gallipolis and Marietta posts, also known as border posts, as experience that will help his in his new job.

While getting promoted and getting the new responsibility has been a good experience, it has been bittersweet in a way, Call said. He said there are still troopers in Gallipolis he has worked with since he began his career and he will always have a soft spot for the post.

But, Ironton is his new work home, and he said he takes seriously his new responsibility of protecting and serving the citizens of Lawrence County.

Dumpster diving, antiquing and spending entire days searching through anything and everything at yard and estate sales, flea markets and... read more