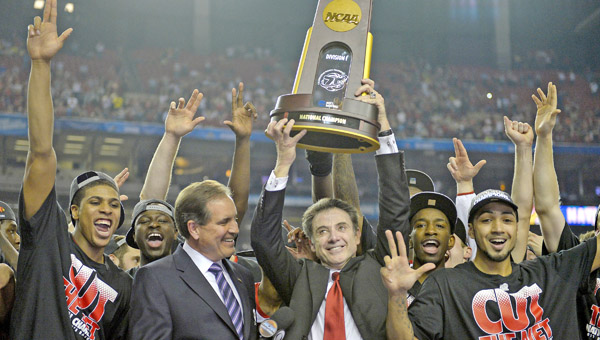 ATLANTA (AP) — Rick Pitino capped the greatest week of his life with the prize he wanted most of all.

Luke Hancock produced another huge game off the bench, scoring 22 points, and Pitino became the first coach to win national titles at two schools when relentless Louisville rallied from another 12-point deficit to beat Michigan 82-76 in the NCAA championship game Monday night.

This title came on the same day Pitino was announced as a member of the latest Hall of Fame class, a couple of days after his horse won a big race on the way to the Kentucky Derby, and a few more days after his son got the head coaching job at Minnesota.

This was the best feeling of all. The Cardinals (35-5) lived up to their billing as the top overall seed in the tournament, though they sure had to work for it.

Louisville trailed Wichita State by a dozen in the second half before rallying for a 72-68 victory. This time, they fell behind by 12 in the first half, though a stunning spurt at the end of the period wiped out the entire deficit.

“I had the 13 toughest guys I’ve ever coached,” said Pitino, who plans to follow through on a promise he made to his players if they won the title — by getting a tattoo.

No one was tougher than Hancock, who matched his season high and was named the most outstanding player — the first sub ever to win the award.

Coming off a 20-point effort in the semifinal victory over Wichita State, he came off the bench to hit four straight 3-pointers after Michigan got a boost from an even more unlikely player.

Freshman Spike Albrecht made four straight from beyond the arc, too, blowing by his career high before the break with 17 points. Coming in, Albrecht was averaging 1.8 points a game and had not scored more than seven all season.

Albrecht didn’t do much in the second half, but Hancock finished what he started for Louisville. He buried another 3 from the corner with 3:20 remaining to give the Cardinals their biggest lead, 76-66. Michigan wouldn’t go away, but Hancock wrapped it up by making two free throws with 29 seconds left.

While Pitino shrugged off any attempt to make this about him, but there was no doubt the Cardinals wanted to win a national title for someone else — injured guard Kevin Ware.

Watching again from his seat at the end of the Louisville bench, his injured right leg propped up on a chair, Ware smiled and slapped hands with his teammates as they celebrated in the closing seconds, the victory coming just 30 miles from where he played his high school ball.

Any pain he was feeling from that gruesome injury in the regional final, when he landed awkwardly, snapped his leg and was left writhing on the floor with the bone sticking through the skin, was long gone as he hobbled gingerly onto the court with the aid of crutches, basking in a sea of confetti and streamers.

Louisville again came out wearing Ware’s No. 5 on the back of their warmup jerseys, which said “Ri5e to the Occasion” on the front. When the title belonged to the Cardinals, Ware put on a championship cap and got a big hug from Pitino. Then, they lowered the basket so the injured player could cut a strand out of the net.

This one belonged to him as much as anyone on the court.

Peyton Siva added 18 points for the Cardinals, who closed the season on a 16-game winning streak, and Chane Behanan chipped in with 15 points and 12 rebounds as Louisville slowly but surely closed out the Wolverines (31-8).

Michigan was in the title game for the first time since the Fab Five lost the second of two straight championship games in 1993. Players from that team, including Chris Webber, cheered on the latest group of young stars.

But, like the Fab Five, national player of the year Trey Burke and a squad with three freshman starters came up short in the last game of the season.

The first half might’ve been the most entertaining 20 minutes of the entire tournament.

Burke started out on fire for Michigan, hitting his first three shots and scoring seven points to match his output from the semifinal victory over Syracuse, when he made only 1-of-8 shots.

Then, when Burke picked up his second foul and had to go to the bench for the rest of the half, Albrecht took control. The kid whose nickname comes from his first pair of baseball spikes showed he’s a pretty good hoops player, knocking down one 3-pointer after another to send the Wolverines to a double-digit lead.

When Albrecht blew by Tim Henderson with a brilliant hesitation move, Michigan led 33-21 and Louisville was forced to call timeout. The freshman was mobbed on the Michigan bench, like the Wolverines had already won the national title, with one teammate waving a towel in tribute.

“That was honestly, probably back to high school days,” Albrecht said, remembering when he’s had a stretch like that. “Coach Beilein doesn’t play guys with two fouls in the first half, so I knew I was in the rest of the half, and I was fortunately hitting shots. Teammates were finding me. That’s about it.”

It didn’t last. Not against Louisville.

The Cardinals came back one more time.

“We just went into war right there with a great Michigan team,” Hancock said. “We needed a rally and we’ve been doing it for a couple of games straight, being down. We just had to wait and make our run.”

Burke, who played only six minutes in the first half because of foul trouble, finished with 24 points and did his best to give Michigan its first championship since 1989. But he couldn’t do it alone. Albrecht was held scoreless after the break, and no one else posted more than 12 points for the Wolverines.

Still, it was quite a run for a fourth-seeded team that knocked off No. 1-seeded Kansas with the greatest comeback of the tournament, rallying from 14 points down in the second half to beat the Jayhawks in the round of the 16.

But they came up against the ultimate comeback team in the final.

“I’ve had a lot of really good teams over the years, and some emotional locker rooms, and that was the most emotional we’ve ever had,” Michigan coach John Beilein said. “The team unity we had, the sacrifice we had from five seniors who did not get to play very much, to these young guys buying into the team concept.

“We feel bad about it. There are some things we could have done better and get a win, but at the same time, Louisville is a terrific basketball team. We have not seen that quickness anywhere.”

Louisville had already pulling off a stunning rally in the Big East championship game — down by 16 in the second half, they won by 17 — and another against Wichita State. They surged back again behind their own ace off the bench.

Hancock matched Albrecht from the 3-point stripe. Then, trapping the youngster and knocking the ball away, he set up a fast break that ended with Siva flipping up a lob that Montrezl Harrell slammed through for a dunk, capping a stunning 16-3 run in less than 4 minutes that gave the Cardinals their first lead of the night, 37-36.

Glenn Robinson III made two free throws with two seconds left to give Michigan a 38-37 lead at halftime.

But everyone knew this game was just getting started.

And when it was done, Pitino, Ware and the Cardinals were celebrating in the middle of the mammoth Georgia Dome, assuring the national title will stay in the bluegrass another year.

Last season, it was Kentucky winning it all, the same team that gave Pitino his first title in 1996.

Now, he’s got another one — right down the road in Louisville.