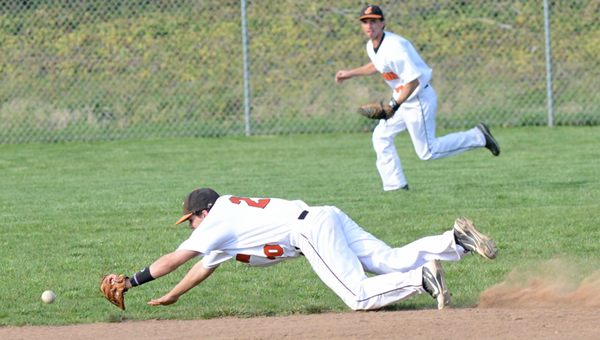 If the other team doesn’t score, you don’t lose too many.

The other team didn’t score as Derek Battise fashioned a two-hit shutout and the Ironton Fighting Tigers blanked the Portsmouth Trojans 4-0 on Tuesday.

“The defense backed up Derek very well tonight. We got a couple of timely hits to give us the lead. We did a much better job of shortening our swings with two strikes and putting the bat on the ball.”

Battise struck out three and walked three in going the distance.

Ironton (2-3) got a run in the second inning when Sean Lawless and Trevor White were hit by pitches, moved up on a ground out and Trevor Easterling hit a sacrifice fly.

Battise nursed the lead until the sixth when Ironton scored three insurance runs.

Battise doubled with one out and Lawless singled and took second on the throw home. Mo Phillips followed with a two-run double and scored on a ground out.

Phillips was 2-3 with two RBI as Ironton had six hits. Battise was 2-3 while Lawless and Easterling were 1-2.