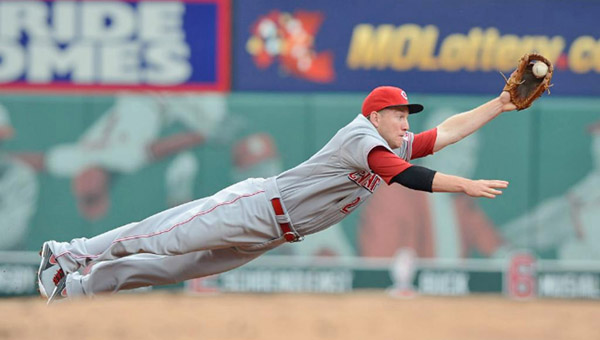 Cincinnati Reds’ third baseman Todd Frazier makes a diving stop of a ground ball hit by St. Louis’ Yadier Molina and throws him out at first base. Frazier played well defensively but was 0-for-11 at the plate in the series. The Reds lost 10-0 on Wednesday to the Cardinals. (Photo Courtesy of the Cincinnati Reds.com)

ST. LOUIS (AP) — It’s no mystery to Homer Bailey why the Cincinnati Reds have so much trouble winning in St. Louis. After all, look what happened to him.

Bailey was cuffed for three home runs and seven runs, abruptly ending his string of 23 consecutive scoreless innings, in a 10-0 loss Wednesday. The Reds are the defending NL Central champions and finished nine games ahead of the wild-card Cardinals last season, but since 2003 have won just three of 28 series in St. Louis with two splits.

“Probably because they have a really good team,” Bailey said. “That has a lot to do with it. I don’t think it’s necessarily over here so much.”

Manager Dusty Baker had his hopes up after the Reds’ nine-run ninth stunned the Cardinals in the home opener. But the Reds were outscored 15-1 the last two games.

“The thing about it is their pitching really shut us down,” Baker said. “(Lance) Lynn was tough last night and (Jake) Westbrook was tough today.”

Westbrook pitched a five-hit shutout and the Cardinals totaled four homers. Jon Jay, Carlos Beltran and Matt Adams homered in a span of seven at-bats off Bailey in a game that was scoreless into the bottom of the fifth.

“Day games always feel a little bit off, but I’m not using that as an excuse,” Bailey said. “I rolled them pretty quick in the first couple of innings, then they started seeing the ball pretty well.”

Matt Carpenter added a two-run homer on a four-hit day. Adams homered for the second straight game and added an RBI double and walk.

Westbrook pitched his first shutout since Aug. 9, 2006, against the Angels when he was with Cleveland, and this was his 15th career complete game. He held the Reds hitless in six at-bats with runners in scoring position, and contributed his 11th career RBI with a single in the seventh for St. Louis’ final run.

Bailey’s innings-streak included his no-hitter against Pittsburgh last season. After getting the first two outs in the fifth against the bottom of the order, the right-hander gave up hits to seven of the last eight batters.

Bailey dropped to 3-8 with a 5.52 ERA against the Cardinals, including 0-4 with a 6.93 ERA at Busch Stadium. Baker pulled Bailey after Pete Kozma’s liner struck the pitcher just above his right ankle, with the ball caroming into left field. But Bailey walked off without a limp.

“He was throwing well and then he lost it,” Baker said. “He put the ball over the plate and they’ve got some guys who know what to do with it when you do that.”

The Cardinals advanced only two runners into scoring position in the first four innings and Bailey got two quick outs to start the fifth before running into trouble against the top of the lineup. St. Louis scored 10 runs on 11 hits in the fifth, sixth and seventh off Bailey, Logan Ondrusek and Alfredo Simon.

Beltran then hit his first homer of the season on to make it 4-0.

Adams hit a two-run homer in the sixth off Bailey. Carpenter’s two-run shot homer three batters later made it 8-0.

NOTES: Jay has 19 career homers, six of them against the Reds. … Choo was 0 for 2 with a walk and hit by pitch to end a four-game streak of two hits each game. … Cincinnati’s Todd Frazier was 0 for 11 in the series after opening the season with a six-game RBI streak.

COLUMBUS (AP) — After years and years of getting a cold shoulder from the city of Cincinnati, Ohio State’s football... read more