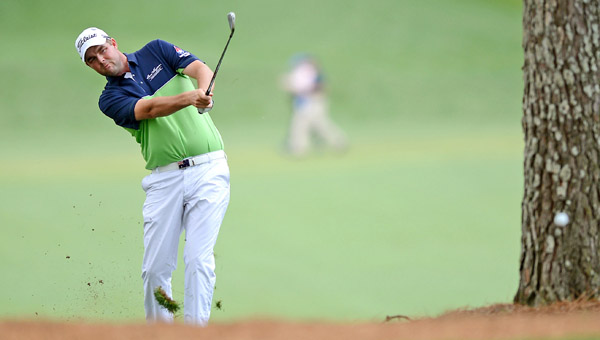 Marc Leishman hits his second shot on the 17th hole on his way to shooting six under in the opening round of the Masters Tournament at Augusta National Golf Club in Augusta, Ga., Thursday. (MCT Direct Photo)

AUGUSTA, Ga. (AP) — Sergio Garcia might have written himself off too quickly at the Masters.

When last seen walking off the course at Augusta National, the impetuous Spaniard was moping about his bad luck at this tournament and said last year it was increasingly evident he would never be fitted for a green jacket.

Garcia matched his best score at the Masters on Thursday, a 6-under 66 with no bogeys on his card, to share the lead with Marc Leishman of Australia. And he still wasn’t entirely happy, although this time with good reason. He hit the ball so well his score could have been so much better.

“To tell you the truth, if I manage to make a couple of the putts that kind of stayed around the lip, I could have been probably 7- or 8-under par through 10,” Garcia said. “It was that good. And it wasn’t like I was hitting pitching wedge every single time. I was hitting 4-irons and 5-irons and 6-irons, so it wasn’t that easy.”

It sure felt easy for several players in a gentle opening round — even for an eighth-grader.

Guan Tianlang, the 14-year-old from China and youngest to compete in a major in 148 years, played well beyond his age and holed a 15-foot putt from just off the 18th green for a respectable round of 73 and a reasonable chance of making the cut.

Tiger Woods wasn’t far off as he began his quest for a fifth green jacket. Wild at the start, including a tee shot that knocked a cup of beer out of a spectator’s hand, Woods settled into a groove and opened with a 70 as his girlfriend, Olympic ski champion Lindsey Vonn, watched on a few holes.

In his four Masters wins, Woods has never opened with a score lower than 70. His key is not to shoot himself out of the tournament.

“It’s a good start,” he said. “Some years, some guys shot 65 starting out here. But right now, I’m only four back and I’m right there.”

Garcia and Leishman had a one-shot lead over Dustin Johnson, who has a game that fits perfectly for Augusta and he finally brought it. Johnson hit a 9-iron for his second shot on the par-5 13th and made a 15-foot eagle putt, and he smashed his drive on the par-5 15th and hit pitching wedge just through the green for an easy birdie.

Fred Couples, the 53-year-old wonder at his favorite major, made bogey on the 18th and still was in the large group at 68. There were a dozen rounds in the 60s, and nearly half the field shot par or better. Three-time Masters champion Phil Mickelson recovered from a rough start by running off four birdies in a five-hole stretch on the back nine to salvage a 71, while Rory McIlroy had a 72.

Woods said he struggled with the slower pace of the greens, and so did defending champion Bubba Watson, who opened with a 75.

“They’re soft and they are slow, and consequently we have 45 people at par or better,” Mickelson said. “But that means I’ve got to change my whole mindset and just get after these pins, because the ball’s not running like it used to and I’m giving this course way too much respect because of my past knowledge.”

It’s not about respect for Garcia. Augusta National is the ultimate love-hate relationship, and Thursday was a rarity. He loved it.

Garcia began his round with an approach that danced by the hole and left him a tap-in birdie. He rolled in a 20-foot birdie on the par-3 sixth, and then shot up the leaderboard with a pair of tough, downhill putts from 8 feet on the ninth and 15 feet on the 10th.

“It’s obviously not my most favorite place,” he said. “But you know, we try to enjoy it as much as we can each time we come here. Sometimes it comes out better than others, but today it was one of those good days. Let’s enjoy it while it lasts.”

That was a far different attitude than last year on the weekend, when he went from one shot out of the lead going into the third round to back in the pack with a 75. He told Spanish reporters that day he had been trying his entire career to win a major and “I don’t feel capable of winning. … After 13 years, my chances are over. I’m not good enough for the majors. That’s it.”

Garcia struggled off the tee on the back nine, and he three-putted for par at the 13th. He also made tough par saves on the 11th and 17th for his first bogey-free round at the Masters since 2002.

“The last eight holes mean a lot that I kept my composure, even though I didn’t hit it as well as I did the first 10 holes,” he said.

Composure is everything to Garcia, a 33-year-old who still acts like a kid. Only three weeks ago, he hit a tee shot at Bay Hill that settled on a large branch in a tree. Garcia climbed the tree, played a remarkable backhanded shot to the fairway and then jumped some 10 feet to the ground. He withdrew a few holes later when the rain arrived.

He smiles. He sulks. And he always says what he’s thinking, which sometimes gets him in trouble. Garcia doesn’t regret his comments at Augusta last year, only that he didn’t choose his words carefully. He chalked it up to frustration, but says he is trying just as hard as he did when he was 19 and challenged Woods at Medinah in the 1999 PGA.

“Every time I tee it off, I try to play as well as I can, hope that my best that week is really, really good,” Garcia said. “And if I manage to do that, I will have a chance at winning. If my best is not that good, then I’ll struggle a little bit. Today, my best was pretty good. And I’m looking forward to doing the same thing the next three days.”

“I think I’m pretty focused on golf,” Guan said. “It’s made me do pretty good so far.”

Woods has higher goals. He has gone five years without winning a major, and his last Masters title was in 2005. With three PGA Tour wins and the No. 1 ranking, he is the overwhelming favorite this week.

“The biggest challenge today was just the speed of the greens,” Woods said. “They just weren’t quite there.”

Leishman was the first player to post at 66, a moderate surprise considering he missed the cut in his only Masters appearance in 2010, and he had failed to break 70 in his last nine rounds on the PGA Tour dating to the first week in March.

The turning point was four straight birdies in the middle of the back nine, finishing with a long putt on the 16th.

“I don’t know how far that was, but it was in a different zip code,” Leishman said. “That happens when you have a good day, and you’ve just got to make the most of it.”