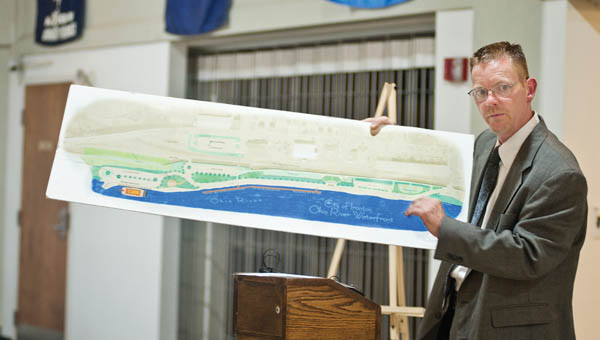 Only 16 communities in the entire country were awarded boating infrastructure resources from the U.S. Fish and Wildlife Service this year — and Ironton was one of them.

Mayor Rich Blankenship said he was notified Tuesday that the Boating Infrastructure Grant program, which he applied for in June 2012, has been awarded to the city.

The $630,000 in grant money will go toward the more than four-year ongoing riverfront development project.

The grant also comes with the stipulation to match about $212,000 to receive the funds, but Blankenship said he feels confident the match can be made.

“Working with local entities, I believe we can have that money,” he said. “We have already been in talks with different entities to obtain that match.”

Blankenship said a time frame for work to begin hasn’t been settled yet. The project must still go through the design phase and bidding process.

The BIG grant is one of several the city had been awarded to continue work on the riverfront, which Blankenship says has been under-utilized for years.

“For as long as I can remember, our riverfront has been under-utilized,” Blankenship said. “I want our citizens to be able to take their families down there and enjoy the Ohio River and not worry about trash and glass. Actually have restroom facilities and sidewalks to be able to get down to the river and enjoy it.”

The riverfront project began a few years ago with soil remediation on two parcels of property, one owned by the city and one owned by the Ironton Port Authority. The city was awarded $1.5 million in Clean Ohio funds from the Ohio Department of Development for the remediation.

The city was also awarded Nature Works grants from the Ohio Department of Natural Resources to place riprap on the shoreline to correct erosion problems on the riverfront, which has been completed, as well as to build walking and biking trails.

Blankenship compared the Ironton riverfront project to other nearby communities like Ashland, Ky., Huntington, W.Va. and Portsmouth.

“I am looking forward to this project and getting started on it,” Blankenship said. “It’s not going to be an overnight project. It will take months and years probably to complete. But I am very grateful and fortunate that we have, out of the entire country, been able to be awarded this money.”

If the planes go, what could be next?

CHESAPEAKE — This time next year Lawrence County might possibly not have an airport and for at least one commissioner... read more