Community gets ‘ramped’ up for perennial dinner 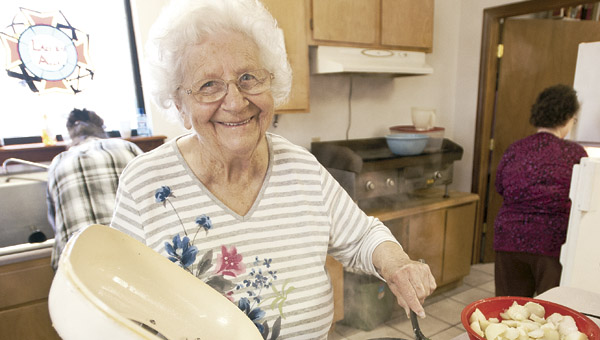 Hazel Clark, with the ladies auxiliary, cooks up a batch of ramps and potatoes during the annual dinner at the Proctorville VFW Post 6878 Saturday.

PROCTORVILLE — According to the folks at the Proctorville VFW Saturday, you either love ramps or you hate them.

But to see the dining tables filled with eager eaters for the perennial dinner, it would be difficult to find someone who wasn’t prepared to chow down on the onion-like plant.

By 12:30 p.m. more than 130 people had walked through the doors of Post 6878 to feast on the wild ramps, beans, potatoes and cornbread cooked up by the ladies auxiliary and served by VFW members.

Jane Napier, president of the ladies auxiliary, said the group cooked at least 30 pounds of beans, while the men dug up about 33 bags of ramps.

“We got more this year that we ever have,” said Dean Cooper, a post member who helped with the ramp dig.

And Saturday’s crowd was already on pace to beat last year’s numbers.

And it’s not just the locals who come for the dinner. Cooper said folks have come from as far away as Detroit, Mich., to enjoy the ramps. Napier said people also come from Wayne, W.Va., and Columbus.

For the past 20 years, the VFW has served up the wild delicacy to raise money for the upkeep of the post home and to fund its various community projects.

Bill Thacker, quartermaster, said the ramp dinner is the most successful fundraiser of the year.

“We are lucky,” Thacker said. “We are a small community, but we get so much support.”

In addition to using proceeds to help keep the post home running, Thacker said the VFW uses its profits to help veterans in need, support the VFW National Home for Children, and also donates to local causes like the renovations at the Chesapeake Community Center.

Thacker also said the post is always looking for new members. Currently, there are members in Post 6867 who fought in Korea and Vietnam, as well as a few members who fought during WWII and Bosnia.

“We’d love to get more members,” Thacker said. “We lose more than we are gaining.”