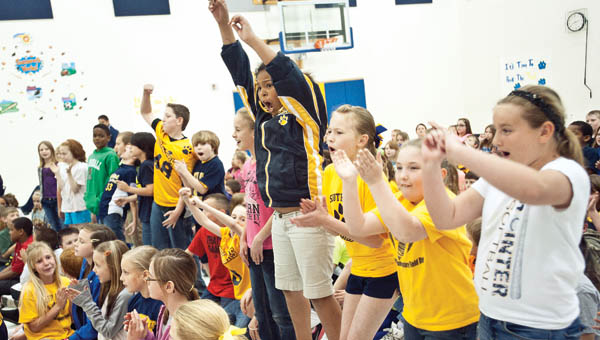 Students from Team Roberts jump up and down and scream as they are recognized during an academic pep rally at South Point Elementary School.

SOUTH POINT — The screams went off the decibel chart as the South Point, cheerleaders and Old Blue, the Pointers mascot, rocked the gym at the elementary school pumping up the crowd Friday afternoon.

But this rally was not to cheer on a football or basketball team, rather it was to encourage the third, fourth and fifth graders at South Point to excel this week when they take the Ohio achievement tests.

“We want to cheer the team on,” Bill Christian, administrative assistant to principal Chris Mathes, said.

“We want them to work together to do their very, very best.”

Christian and Mathes were front and center as they encourage each student to get out there and “rock the test.”

“I want you to believe in yourself,” Christian told the students. “You have worked hard. You have stayed after school. I want you to achieve. You can do it. Let’s show what you know.”

Once a year students take the state-mandated achievement tests whose scores go to the Ohio Department of Education to make up the data for the school report cards.

Students are in third grade when they first must take the exam and are tested in reading and math. In fifth grade a science section is added to the test.

As part of their preparation for the tests, students could take advantage of a self-guided computer program called Study Island.

“We had 19 students who completed the entire program,” Christian said. “When they had free time, they would go to the computer lab.”

Those students had their names put in a drawing to get an iPod touch, part of which was paid for with a $50 gift card provided by Walmart.

The winner was Drew Fryer.