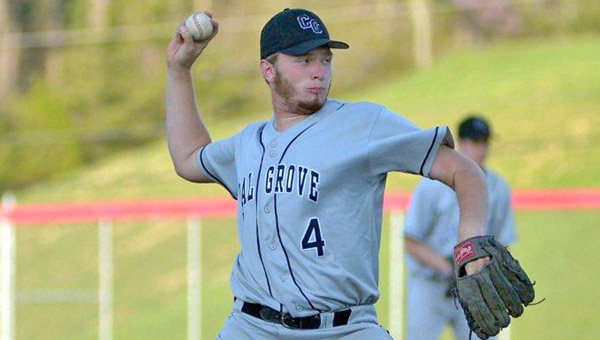 Jacob Pierce pitched a one-hitter as the Hornets dealt the first-place Redmen their first OVC loss 8-1 on Monday.

Pierce struck out seven and walked four. The only hit was a sixth inning double by Jonah Cox.

“Pierce pitched really well and when they hit the ball we made the plays. The kids really stepped it up,” said Hornets’ coach Dean Mader.

Rock Hill fell to 9-3 and 7-1 in the OVC. The Redmen visit to Fairland on Wednesday in a battle for first place and they travel to South Point on Friday.

Coal Grove (3-8, 1-6) got a big game offensively from shortstop Travis Carey who went 4-4 with four runs batted in.

The Hornets scored four times in the second inning.

Pierce, Cody Pennington and Conor Markins all walked and Carey had a two-run single. Jonathan Joseph and Mason Nance each singled in a run.

The lead went to 6-0 in the third when Pierce reached on an error, two walks and another two-run single by Carey.

The final two runs scored in the fourth on RBI singles by Pennington and Markins.

Rock Hill scored its only run in the sixth when Cox doubled, went to third on a wild pitch and scored on Jack Goodwin’s groundout.

CINCINNATI (AP) — Reds manager Dusty Baker’s mind was worn out from another long, long game. At least he could... read more