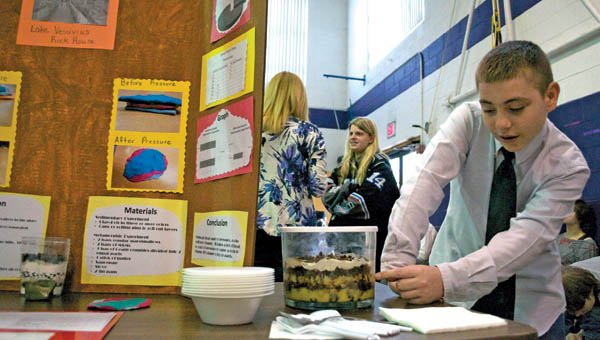 Flashing lights, good-looking food and homemade lava lamps were just a few sights and smells floating around the Open Door School gym as the school hosted its biennial science fair.

Thirty-two students worked together with general education students from area schools to create 16 projects for competition. Kendra Heim, Open Door principal, said the event is a great way for students to integrate with other school districts.

��Sometimes the other students will come here, but we go out to the other school districts as much as possible,” Heim said. “I think peer integration is very important and I try to model our science fair off of others in the county.”

Kyle Bolan, 15-year-old Open Door student, said he enjoyed working with other students and getting out to research his projects.

“We went to the Rock House at Lake Vesuvius. That was fun,” Bolan said. “We studied how pressure and heat make rocks form.”

The project, entitled “Rocks” focused on the formation of metamorphic and sedimentary rocks and took first prize in the geology category.

The science fair is meant to be fun, and has lived up to that goal since its inception six years ago, Venessa Honaker, judge and former Open Door School teacher, said.

Honaker, now a guidance counselor in the Symmes Valley School District, said she was invited to be a judge and accepted because she enjoys working with the students.

“I was here when we started doing the science fair,” Honaker said. “While I was a teacher here, I saw how excited the kids were to do the projects. The science fair gives them a way to focus their interest and learn by doing these projects.”

And the learning and fun showed in their projects, Heim said. Some projects used food, such as “Rocks” that used layered pudding and chocolate to symbolize layers of rocks, while others involved model cars or birdhouses.

Heim said competition was fierce, and all the students wanted the gold cup that comes with being the grand prize winner. Since the school rotates its science and social studies fairs each year, students of the “Bouncing Egg” crew will have bragging rights for two years before someone else can attempt to take their trophy.

Funds for summer youth program up for 2013

Federal funding for at least one summer youth work program has been increased this year by almost $90,000. The Lawrence... read more